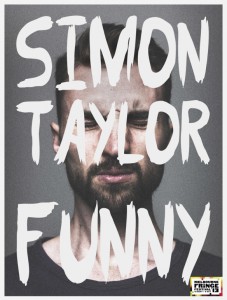 Simon Taylor’s ‘Funny’ is a new hour of stand-up comedy from someone who has been more renowned in the past for being an excellent magician but in this show he  presents exactly what it says on the label. With a keen observational eye and charming delivery, Taylor does nothing but bring the funny.

2013 RAW Comedy finalist Jay Morrissey did a short set first, warming up the crowd with a blend of self-depreciation and bravado. His performance was a welcome surprise. Morrissey was confident in his material and even managed to fit a little play into the spot. Not only was his set a joy to watch, it was also really great to see new talent being supported in this way. I’m certain Morrissey will earn himself a good number of new fans.

After the audience had been adeptly warmed, Taylor took to the stage, tackling topics from language to reality TV to relationships and bringing his deft wit to all. His breakdown of Australian accents is particular highlight, illustrating the strange poetic beauty of boganisms. Taylor was quick to establish a rapport with the audience. The atmosphere of the room was relaxed and Taylor’s interactions with the audience felt genuine. There was the odd joke about someone’s hometown or relationship status, but it was never mean-spirited.

‘Funny’ is a well-rounded piece of stand-up. Yes, there are explorations of how we function in society, but there are also jokes about Craigieburn. Taylor’s material is sharp and very clever, and he’s not afraid to show a bit of vulnerability as well – perhaps best illustrated in his bit about compromises in relationships. It makes for a show that is intelligent, endearing and all too relatable.

Taylor’s work building up his comedy skills at gigs around Australia and in the USA have paid off. Catch him while you can, before he starts getting the nightly sold out audiences his show deserves. You’ll even pick up some handy tips on how to deal with taxi services.

Simon Taylor – Funny is on at The Imperial Hotel until October 6.