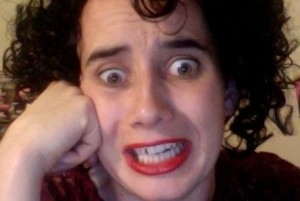 Despite the title, Jude the Obscure was not a theatrical staging of Thomas Hardy’s tragic novel. Using comedian Judith Lucy as a character in a story about space exploration was a strange premise that certainly piqued the interest of Lucy’s fans. They might expect a story with our hero Judith getting into some comical scrapes while saving the day with some dry, witty comments. The reality however was quite different.

This show was essentially the study of a woman unhappy with her life, wishing to become at one with the universe. It wasn’t exactly clear whether the journey was being described to us after the fact or that departure was imminent. There was speculation into what could be done in zero gravity and a very long scene describing black holes, all tied in with snippets from Lucy’s comedic work and recent “…Spiritual Journey” television series. One interesting section saw the verbatim accounts of trained astronauts describing the emotional view of Earth as seen from space. A perplexing dance routine to “Under the Milky Way” added some colour and movement and, just like Lucy, she was not embarrassed to look like a fool (in this case a bucket on her head as a helmet).

Alice Williams did a good job in mimicking Judith. She certainly looked the part, had a lot of the vocal inflections nailed and her gestures were close. There was something a little unworldly about her, the caked-on face paint and aggressive application of lipstick seemed to suggest that she was going for a sad clown character. Dry Lucy-esque quips tried to inject some laughs amongst the philosophical musings, some worked but generally the timing and delivery were off.

Lucy is known for savage self-deprecation in her comedy and this is what Williams has focused on, but the concepts behind Judith’s routines weren’t really used as a comic device. The topics that Lucy has often mined for comedy (her years of excessive drinking, eccentric adoptive parents and love-life full of pitfalls) were often only mentioned in passing by Alice to relate them to the space storyline. In doing so she paints Lucy as a pitiful character who’s full of self-loathing but has come to accept her lot in life. It’s a one note portrayal, laid on rather thickly, which many fans would object to and claim that this representation of Lucy is no longer relevant (Lucy’s most recent work leaves most of this “woe is me” schtick behind).

There were some interesting ideas to ponder in this forty minutes (not the advertised sixty) but one wonders if the same show using a wholly fictional character would get as many bums on seats. Fans of Judith Lucy will be disappointed by the treatment of her and not learn anything of value about the main character. Those who hate Lucy wouldn’t care to spend this amount of time in her company to learn about the cosmos. People who sit on the fence won’t get many laughs but will hear some nice facts about space and theories about human existence. Such is the beast that is Fringe theatre, the creators are bang up for subverting an audience’s expectations.

Jude the Obscure is on at the Tuxedo Cat until September 28
http://www.melbournefringe.com.au/fringe-festival/show/jude-the-obscure/#