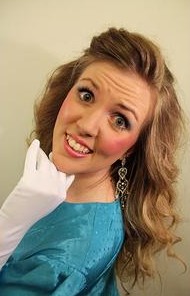 Sophie Kneebone performs a sketch show with a difference, more of a beautifully drawn character study in the style of Kate McLennan. You can see a little Chris Lilley influence here too but less strident and cruel.There are a lot of brash wacky sketch shows that are more miss than hit and it can be a chore waiting for a good skit. Braveface is a more thoughtful kind of sketch show, that still illicits plenty of laughter but also eventually forms a play. Most of the sketches are funny in themselves and seem to stand alone, but by the end you realise that all of the characters are connected by more than their brave face.

A chair and lace clothed side table with teapot and cup, then notably, a parrot’s perch and an artist’s easel.  The tiny stage is simply set as the sitting room of the main character Linda who we eventually learn is a career coach at a high school. She is at the centre of the story linking the characters but there are many deeper connections that are gradually pieced together like a quilt Linda might’ve made. Her crafty talents are also some of the comedy highlights of the show.

Other characters we meet include an Irish chaplain who’s not as groovy as he thinks he is, a psychic with funny made up tarot cards, a milk bar lady and a smartarse schoolboy. Only the school boy, though done well and completely believable (Sophie works in a school after all), seemed a bit clichéd, but maybe this is mostly Chris Lilley’s fault and I always feel a little uncomfortable when middle class comedians parody working class kids. The laughs though, are plenty and Sophie never comes across as derisive or mean to the people she has created, no matter their follies or delusions.

Sophie Kneebone, who has no doubt honed her character skills as part of The Big Hoo-Haa, is a remarkably fine actress who pulls off all her characters with warmth, subtlety and good comic timing. The show has also clearly benefited from direction by Lee Naimo as the pace and flow work very well. There is a fine use of music throughout, a wonderfully lame rap and some rather less successful interpretive dance where I couldn’t quite work out what it was interpreting. So, not all the sketches work, but the majority that do are stunning, very funny, sweet, poignant and occasionally moving. This is a gorgeous play at Melbourne Fringe that  you can definitely take your mum to.