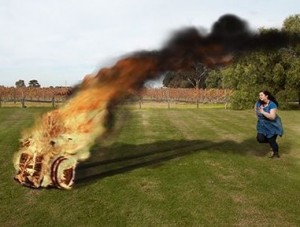 In …The Shitty Carer Nellie told the story of her experience working in the UK as a carer, a role she was rather unqualified for and completely unprepared. The advertising is rather drastic (see the image to the right) so the expectations of something comically over the top were high. The resultant show however was the polar opposite with low key observational humour, deliberate pacing and an extremely serious tone.

The show started off well with some amusing stories about her time spent in London and how she fell into her role as carer. We heard of how dreary London was, her brief spell of homelessness and the homes she shared with some eccentric characters. Most of the humour came from White’s blunt, occasionally crude, comments about her actions and bizarre quotes from the people she encountered. We laughed with some shock at her temerity and often un-PC thoughts.

When White went into detail about the woman she cared for, a former doctor named Lee, the number of laughs decreased dramatically. There was the odd amusing comment about her comical attempts to cope but generally it turned into heartfelt recollections about her time spent with Lee and her dismay at the lack of support for the gravely ill. This about-face seemed to be due to both the very serious subject matter and her direct involvement with Lee who, as revealed at the top, had passed away since.

It must be a huge emotional drain to revisit these memories every night but it was a hindrance to both the comical content and her delivery. Her words slowed even further than her usual laissez-faire candence and she seemed to be on the verge of tears. After about only thirty-five minutes we were thrust from the theatre to ponder the experience. Her conclusion was not very optimistic and left all feeling rather down; not the greatest way to end a comedy show.

There were the bones of a powerful and entertaining performance in this show but it needs some work before it becomes a polished comedy work with a message. It would have been nice to see some rage rather than all the sorrow to get the points across in an amusing manner.

Nellie White is The Shitty Carer is on at The imperial Hotel until October 6
http://www.melbournefringe.com.au/fringe-festival/show/nellie-white-is-the-shitty-carer/