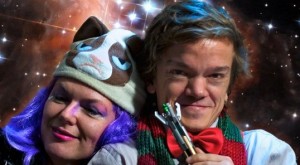 The EmCee is a ‘Brony’ (a bloke who’s into My Little Pony according to Know Your Meme) and the plot concerns Hermione Grainger teamed up with The Doctor to save the Earth from world domination by the evil Ms Grumpy Cat and her Minions. If this plot has you excited then you are a fellow nerd and this show is for you.

The Dr. Who television series turns fifty this year and apart from the BBC special coming up this month and the monthly year-long podcast by Splendid Chaps, here is another way for fans to join in celebrating the Year of The Time Lord. Fans of Harry Potter, Russian cat videos, internet memes and other nerdy pursuits  will also find things to celebrate. I noticed references to Star Trek, Gilbert & Sullivan, and Terry Pratchett too.  Writer and Director Katherine Phelps knows her stuff, an old-school geek who wrote one of the first and popular Australian books on how to surf the Internet when such things were new and just starting to break out beyond the realm of computer geeks. There are no academic insights here though, it’s pretty much an enjoyable diversion with lots of laughs and sing-alongs.

The plot is just as wacky as any modern Dr Who story. The Doctor, superbly portrayed by Ruben David Francis arrives in his Tardis to find that he has regenerated into the body of a man of short stature and has landed on a teenaged girl called Hermione Granger. Hermione, a perfect Dr Who companion and beautifully realised by Sarah Cooper, is looking for Harry Potter who has become the minion of the megalomaniac Villainess Ms Grumpy Cat in an inspired portrayal by Melinda King as a voluptuous Russian Puss in boobs – sorry- Boots.

There is a great ‘Christmas panto for Nerds’ feel to this show with  Zip the Emcee, warmly interpreted as a sort of Buttons character by Andrew Cross. Some of the references are a little obscure, like Nyan Cat. I know what it is but still don’t really get it or its appeal. Ruben’s excellent performance of The Doctor made me think, with all the calls for a female or black Doctor every time he regenerates, have they considered a person of small stature, or an Australian? If not they should check out Ruben, he’s really lovely in the role.

The fun started in the foyer as we entered and later the audience were encouraged to join in on the songs. The props and costumes were clever and added to the atmosphere, though Tard the Grumpy Cat’s outfit leaves little to the imagination and might excite teen boys in the audience a bit too much. Otherwise it’s a great show to take your kids to. The back screen is used simply, to establish scenes  and for some graphics in the finale. It’s good that it doesn’t distract from the show but more fun could be made with it as scenery and so on. The songs are mostly in the “Filk” style of fandom parody or singing new comedy lyrics to known tunes which in this show includes “Love Cats”, “I’m Just Wild about Harry” and a medley from Hair the musical. Though the lyrics were funny, the joke was quickly established and most songs outstayed their welcome. One chorus and verse would have done nicely rather than the entire song.

Beyond the Fringe, [there’s my own nerdy reference] I can imagine this Pop Mashup going down very well at a fan convention.  There is a lot to love in this daggy production, it’s funny, performed with confidence and gusto by an engaging cast and we all got to sing Happy Birthday to The Doctor,  it was a huge hoot.