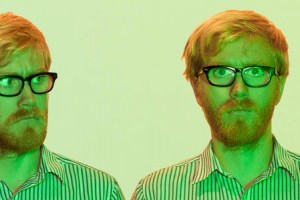 Andy Matthews is a charming performer with a clever mind and a sharp, perverse wit. Originally from Tasmania he has been performing in Melbourne for only a few years and his stand up is nerdy, impressive and his own. After doing shared festivals in the past, this is his first solo festival show. String Theory is a striking showcase for his writing and storytelling skills.

As we enter the small rather packed Loft, Andy is engaging us in some lightly awkward small talk. He explains that there is no backstage for him to hide in and pop out from. It’s actually a good little space for this intimate performance but it does get rather hot, so you might want to dress lightly. His introduction is a warm, inviting one, but it comes with a warning. “Pay attention”. This is not a laid back romp, it’s time to switch on your brains and keep up. We are also introduced to his brother George on the synth who noodles away on his instrument throughout and gives a lovely “Look Around You” early 80’s science documentary feel to the show, particularly to the String Theory segments that ‘tie it all together’.

String Theory is the sort of phrase that keeps coming up on Big Bang Theory and might have piqued your curiosity about what it’s about, well maybe you should be going to a science lecture rather than a comedy show. Apparently Andy Matthews was inspired to do this show after being disappointed by the film ‘Cloud Atlas’. I’ve not seen it but I don’t expect that would change the way you experience Andy’s show which is basically a string of absurd stories strung together by some string theories of Andy’s.

The stories are all bizarre, surprising and densely written. They are often told as if read from a primary source. My favourites are logs from some of explorer Matthew Flinder’s lesser known anachronistic travels , a story told through letters of complaint and a Ballad of Michael Burt, in which a farmer becomes an unexpected hero. The laughs at the beginning, for Flinder’s story were loud and constant, but as the show went on it petered out somewhat and the room became pretty quiet. The stories were all entertaining but they were so densely written and jokes piled on top of each other so that they were hard to catch and left little space to laugh, less you miss more of the story. The stuffy room did not help.

The humour in this show is poetic and literary and would suit fans of absurdest writers such as Lewis Carroll. It is laugh out loud at times and amusing, but more of a spoken word comedic essay rather than a standup comedy performance. With more experience, Andy could work on perfecting his delivery, so that his stories flow better and work better as a performance. At the moment, you can hear that the stories are well written but they are a bit heavy going as a long form performance piece for a comedy audience. Worth a go if you are an adventurous fan of the Absurd.