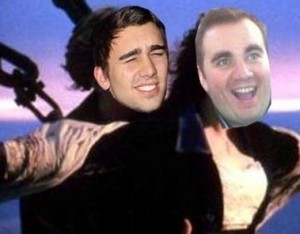 With its cheeky title, the advertising blurb of Marcus and Dan’s Award Winning Show didn’t give too much away but dropped extremely subtle hints as to what to expect. Joining Daniel Pavatich and Marcus Willis on stage were seven other performers and together they set out to improvise an entire movie based on an audience suggested title.

On the night I attended the film was “Three Men Flying” which resulted in a rollicking air force drama set during the cold war era. With a nod to many well-known movies, most notably Top Gun, we saw the interconnected stories of a seriously determined boy with dreams of flying, a pilot with no respect for the rules and a nervous wreck of a co-pilot, and their part in stopping a soviet plane loaded with nukes. Plenty of recognizable movie tropes and clichés were used in the telling of the story; a training montage, a kid out to avenge his father’s death, a cannon fodder character and many, many more.

The way that the show was structured was different to most long form improvised shows in that the character performers weren’t necessarily in control of the story most of the time. Just like a film written by committee everyone not acting in the scene contributed narration, prop and costume description, camera shots (close ups required the subject to approach the front of the stage) and lots of plot twists. At times it was like those not in the scene tried to throw in as many ideas as possible to see what would stick. The result was some very frenetic on stage action with people buzzing around the characters filling in the details with wild gesturing.

An interesting addition was a kind of Director’s commentary where “writer” Pavatich would be called upon to explain a plot point. This tested his quick thinking and produced some laughs but his general response was to comically dismiss the point as being beyond his knowledge rather than make up some outrageous statements to add to the lunacy.
Being the last show of the night at the venue, the team weren’t restricted to squeezing all the action into an hour so no one was really keeping an eye on the clock. There was the danger that they were digging too deep a hole and wouldn’t be able to wrap things up, but somehow gave a satisfying conclusion. The movie approached a feature length of about ninety minutes which fit the concept but was possibly a tad too long. Such is unpredictable beast that is improvised theatre.

The large cast all worked very well together and kept the show moving at a cracking pace. There didn’t seem to be too many toes stepped upon with everyone willing to go with any new direction the movie took off in. This team of quick wits came up with many hilarious lines and scenarios that kept the audience in stitches. It was a hoot.

Marcus and Dan’s Award Winning Show is on at Gertrude’s Brown Couch until October 6
http://www.melbournefringe.com.au/fringe-festival/show/marcus-and-dan-s-award-winning-show/