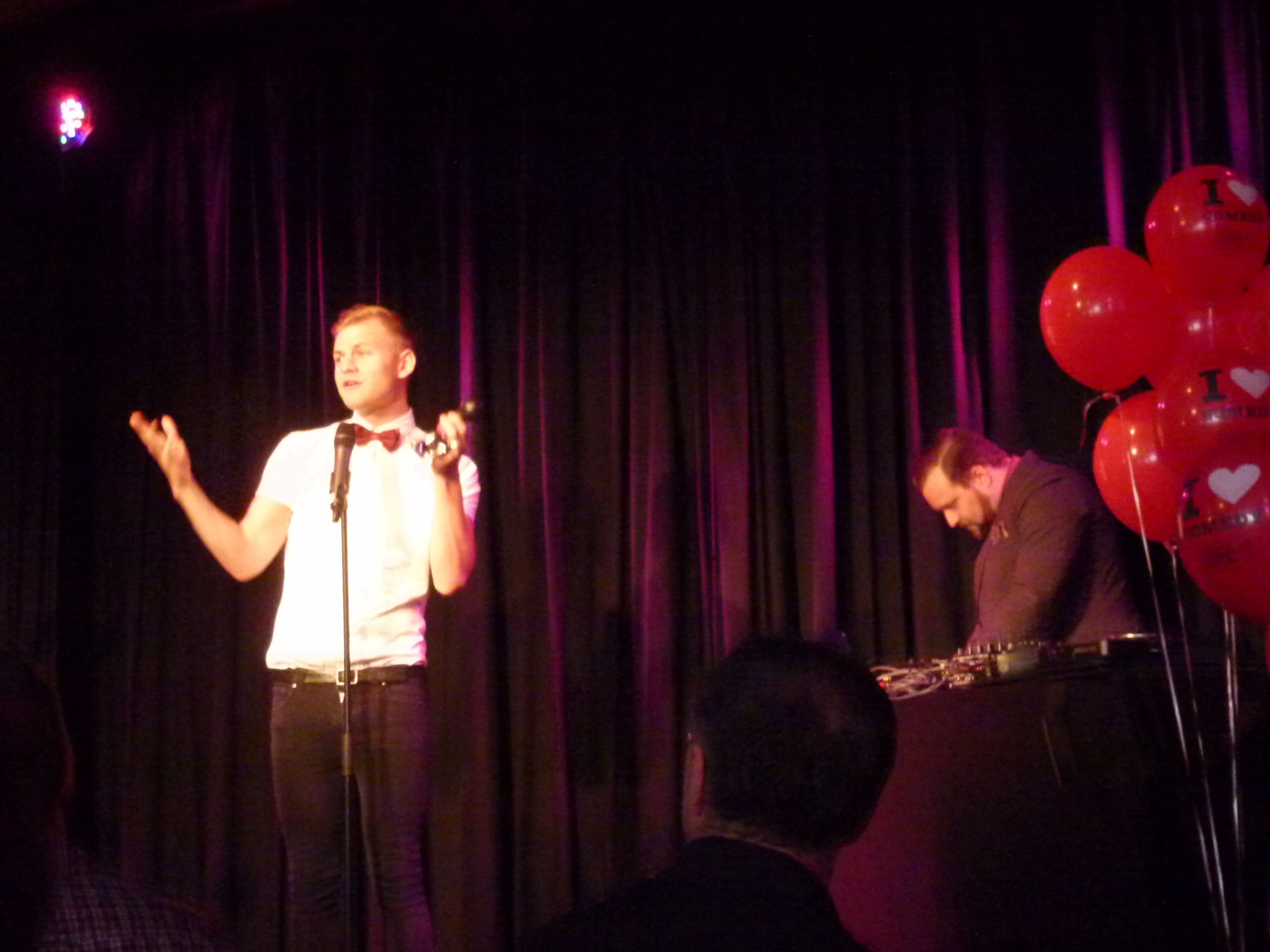 The Melbourne International Comedy Festival was launched the day before Valentine’s Day, so organisers decided to add a romantic theme to the launch with pink fairy floss, cupcakes, red balloons and a bit of speed dating. In front of the stage were fourteen tiny tables with two chairs each. I was one of the press invited/dragged to sit alone at the tables, while host Joel Creasey, with the aid of DJ of Love Andy McLelland, introduced us to our comedian partners. I started with Lehmo who told me about his show LEHMOOOO!!!(get involved), some of it is going to be about doing comedy for the Troops. My other dates were Kate McLelland in her gorgeous duck costume hand made by a very pregnant Claire Hooper, Lawrence Mooney and Miss Itchy. There were cards on the table with question topics like “What are you reading at the moment” but they were not necessary. With Comedians you just ask them to tell you about their show and let them go. Talking is their life.

The Launch was really to celebrate the Festival’s website going live and to give us a taste of the goodies in store. The speed dating was a great way to learn more. Kate’s show The Duck’s Nuts is a bit about not fitting into societies expectations of how you live your life. Lawrence Mooney is a Stupid Liar celebrates the comedian’s stock in trade – lying. Miss Itchy’s Late Night Larvae sounds like an extension of their inaugural Barry Award Winning The Crème the Menthe Breakfast Show with old friends Alphonso the Room Temperature Pony and the dashing Tim Harris.

Miss Itchy are not the only act returning after a long absence,  Matt KIng (of Peep Show, Spirited and most recently the IT Crowd 2013 Xmas special) , who will always be considered partly Australian will be back as part of The Edinburgh Festa Besta. There’s Tim Vine with his own chat show, Blast from the past Arty Putz in his show Very Weird and Slightly Dangerous. The gorgeous Julian Clary who was probably the first person I saw doing a TV game show where there was no significant prize, will be putting audience members through their paces to find a new mate in Position Vacant: Apply Within and the Fabulous Adam Richard is doing Gayapocalypse his first solo show in seven years. Other Aussies we haven’t seen in solo shows for a while include Nelly Thomas (Pleasantly Furious) and Ben McKenzie (Ben McKenzie is Uncool).

There are always so many fascinating ideas being explored by comedians in so many different ways it puts a lot of modern straight theatre to shame. And it’s Funny! One of the themes being explored in several ways is war. Both Lehmo and Justin Hamilton in his show Johnny Loves Mary 1994 will be talking about performing to troops. Damian Callinan’s show is called The Lost WW1 Diary of Private Paddy Callinan and Michael Workman’s show is simply called War. Then there is The Wrestling. Comedian’s pitted against professional wrestlers in the ring.

Time to start making those festival plans and for all you Luddites the hard copy of the Festival Program will be in the newspaper on March 1st.

The printed program can be posted on request to people who live outside of Melbourne. Email info@comedyfestival.com.au with your details to request a program.