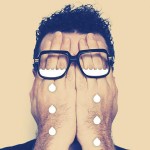 Keck takes us on a tumultuous journey through the lows and the lower lows of his time on this planet; from his troubled entry into the world and the demise from there. We hear about the troubled relationship with his parents, the humiliation of his primary school days; the precarious world of being a comedian and the silent despair he endured during his days of working in an office.

The show has a confessional and vulnerable quality to it; as Keck shares with us some of the most difficult times of his life, as well as some of his most hilariously awful mistakes and the terrible things he’s said to people. Like all confessional acts there is a cathartic element to these revelations, as we groan and moan and laugh with Keck it feels like we are all part of a process of recognition and forgiveness.  Keck is a soulful story teller adept in the art of pathos.

The humbling intimacy of the story Keck shares with us is echoed in his stage presentation; barefoot and in his pyjamas. The stage has only a fridge for decoration, conveying a fragile domesticity fitting for the narrative.

Dealing with the challenging themes of depression and suicide, this show could easily be misinterpreted as an attempt to sensationalize Keck’s personal struggles for the purposes of entertainment. But his presentation is unvarnished, undramatized and non-judgemental. This show is a pleasing distinction from many of the gag-a-minute stand up routines you’ll find at the festival; a wholesome example of storytelling done very well.

The show is centred soundly around Keck’s relationship with the notion of asking people for help, which proves to be a universal and personal theme. Keck isn’t the first to locate laughter in near-tragedy, nor joy from sorrow, but he does it well. Aside from a few slightly suspect jokes around women, this show was an utter delight, a perfect addition to a healthy Fringe comedy diet.