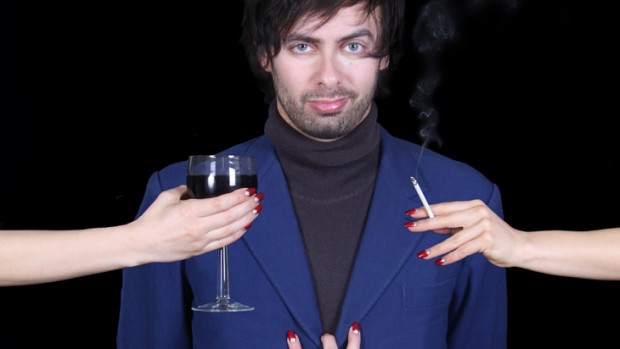 I went in to see Marcel Lucont with some trepidation. I’ve seen Marcel in short bursts and have had mixed feelings about his act. It’s never clear if he’s a specific parody and the character teeters dangerously on the edge of being offensive to French people. At the same time it is a brilliantly realised character in the way that Dame Edna or Borat is, but lacking in the supreme grotesqueness that absurdly makes their abhorrent behaviour more palatable because it is so extreme that it is ridiculous. The important thing that I noticed during Gallic Symbol, however, was that despite my wariness, he made me laugh, a lot.

Alexis Dubus is an English comedian performing as himself in a separate spoken word show in the festival,who could not be more different from the character he created. Marcel Lucont is a sleazy, arrogant, walking French cliché who sneers at his audience (unless they are attractive ladies) with red wine in hand and constantly reminds you about how lucky you are to be in his presence, and in general, the audience laps it up. It has obviously become a very popular character for him and is probably more well-known than he is.

Marcel’s charm is undeniable, and Alexis who is a witty, clever wordsmith, certainly has a lot of fun playing him. To break up what might in lesser hands be a fairly one joke sort of show, Marcel sings songs, reads poetry, reads his autobiography, and performs in filmed skits. He’s a good singer and his songs are amusing and occasionally laugh out loud funny but there is little point to them other than to underline Marcel’s personality. The opening filmed sequence of him running to the show has been done many times now, (I first saw it in a show in 2006 and think it’s been officially done to death.) but the final filmed piece which is a call back to a throwaway line about New Zealand is delightfully brilliant.

Other highlights include a very silly and smart lecture on sex positions that finally got the mostly unimpressed person next to me laughing and the apex of his performance was Marcel doing a so/so impression of an English comedian telling jokes and in the process deconstructing joke telling and becoming very meta. It was a breathtaking, awesome moment that for me makes the show worth the price of admission.

The set is dressed with Chaise lounge, old fashioned suitcases & valises and a vintage dressing table. This and a mockup record album of songs adds to the sense that this show (or perhaps Marcel himself) is set in the past. At times it felt only slightly more sophisticated than a character from ‘Allo ‘Allo or a 1970s film or TV character constantly surrounded by scantily clad anonymous girls with no other purpose than just throwing themselves at him.

The sexism clearly belongs to the character rather than the performer and his enjoyment of sex is usually pretty positive, but the fact that the character is made up of only the worst traits attributed to French people is deeper and more troublesome for me. The character certainly plays to centuries of antagonism between the French and the English, though perhaps in the UK his mocking of the English helps balance it out. I’ve been impressed in the past by Marcel’s surprising ability to control even the rowdiest crowd. His dry, gentle style forces the audience to pay attention. But tonight the audience participation does not go so well. The show ends with Marcel reading out audience member’s tweets and most people in the audience are quiet, intimidated by his sharp tongue, which is not surprising after he catches someone out for pretending to be French. I’m sure he enjoyed the irony of an Englishman pretended to be a Frenchman berating a person for pretending to speak French as much as we did.

I admire Alexis’ acting and the fact that people can be sucked in by the character, believing him to be a real person. At the same time, because he is such a negative character lacking any wink to the audience, I cannot help but compare him unfavourably to Kenny Everett’s gleefully playful Marcel Wave and UK faux French cabaret duo Priorite au Gauche (who were occasionally political, delightfully silly and not unlike Flight of the Conchords).

Overall Alexis has put a lot of work into what is generally a pretty enjoyable show and spending an hour with Marcel Lucont is not without its pleasures. The humour mostly works and the audience doesn’t mind being gently insulted by him. For me the same jokes played differently over an hour wear a little thin but the highlights suggest there could be interesting places for Marcel to venture into the future.

Gallic Symbol is on at The Tuxedo Cat until April 20
http://www.comedyfestival.com.au/2014/season/shows/gallic-symbol-marcel-lucont