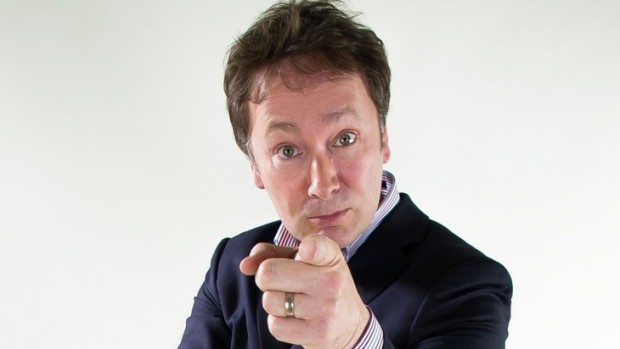 International comedians telling stories about their experiences with Melbourne can sometimes get a little tedious (cue jokes about the weather, the public transport system, Australian drivers and our roads, and Frankston and basically any outer suburb). Jeff Green mentions all of these classics in his new show All Guns Blazing but he manages to keep his insights fresh, entertaining, and not tiresome in the slightest.

Green became an Australian permanent resident several years ago and his Melbourne International Comedy Festival show focuses mainly on his adjustment to living in Melbourne with his wife and two children. While he does briefly poke fun at Frankston and complain rigorously about our famous bipolar weather, he also entertains with original tales of his experiences with Australian public toilets and with one of our greatest national treasures: Bunnings. It may be his classy suit and tie get-up, his English accent or perhaps just his personable nature, but Green is consistently and unwaveringly charming. From the detailed re-enactment of a performance he once did where a firework was lit while clenched tightly in his backside to a side-splitting description of his talented ability to perform poorly in the bedroom, even at his very crudest he still remains a gentleman.

It is easy to see that Green is a stand-up comedy veteran. He is incredibly comfortable on stage and does not hide behind his microphone. He speaks with his audience as though he is conversing with friends, telling us of his adventures and venting about his life. All Guns Blazing is essentially a series of humorous rants blended with charismatic sarcasm plus a hint of grumpy-old-man. Green’s commentary on things like yoga, food intolerance and automatic doors are akin to that of every 50-year-old man who has kids and a yearning nostalgia for the good old days. He definitely appealed mostly to the older members of the audience but was also enjoyed by the younger crowd, possibly because he reminded them of their dads (this was certainly the case for me!). He also performs a rap about his cat which was funny largely because of its lame-factor and because, well, it was about his cat.

Throughout the show there were several opportune moments for Green to converse with and react to the crowd a little but he stuck strictly to his prepared material. His hour-long monologue is excellent, however it would have been even better if he had acknowledged the few times where audience members did something somewhat amusing.

Jeff Green encompasses all factors necessary to create a successful Festival show, including but not limited to: a strong stage presence, many amusing insights about the world we live in, and consistent, well-timed punchlines. He has been part of the comedy scene for a long time, and this is made very clear by his seamless performance. Charming, sarcastic and clever, All Guns Blazing is a ticket to guaranteed laughter.

All Guns Blazing! is at Melb Town Hall & Forum Theatre until April 14