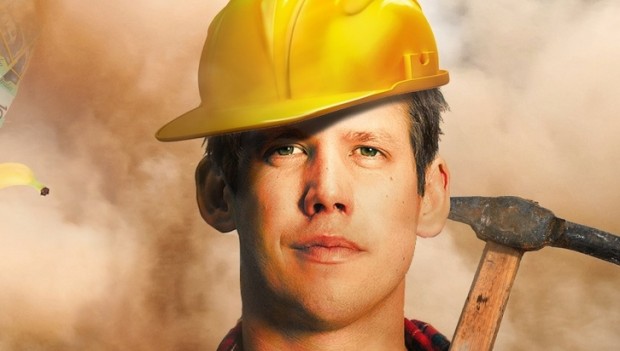 Last year comedian Xavier Toby managed to get himself into quite a bit of debt. So much so that he decided to leave behind his career as a stand-up comic to take a position working for a mine where he could earn a lot of money in a very short space of time and get his finances out of the red.

His show – Mining My Own Business – is the resulting story and does for the mining industry what Kitchen Confidential did for the image of working in the restaurant industry, and the results are not necessarily flattering.

Arriving on stage in a truly hideous Hawaiian shirt, Toby begins his tale by telling the audience the reasons for his decision – the moment he realised just how much debt he was in, the uncomfortable discussion with his uncle when he tried to get a job and the tiny plane containing massive blokes which greeted him on his first day.

Despite his degree in Engineering, Toby is given a position working in admin and this immediately picks him out as an outsider amongst the other, supposedly more manly, mine workers. The Hawaiian shirt is explained within the first few minutes and leads into a running gag about Xavier’s nickname on site. No – that’s not complimentary either.

There follows fifty enlightening minutes of funny, shocking and brutally honest tales of life on a mining site, aided with illustrative photos projected on a screen. Toby explains to the audience how swearing gets used as a form of punctuation by the miners and how they have to hastily modify this in deference to the supposedly more delicate sensibilities of the few ladies on the site when talking to them. He questions the effectiveness of the unwieldy and tedious system of health and safety which it was his job to help administer and how most guys on the site had found ways to ignore or dismiss. His description of the long and involved process for testing a manhole cover is gripping and ultimately baffling.

The audience were kept laughing for a full 50 minutes as Toby related his tales of life on a mining site with the practised delivery and confidence of an experienced performer, even dealing with a particularly rude member of the audience who had decided to make a phone call halfway through.

This is a witty, insightful and intelligent show offering a window into the inner workings of an industry which is usually kept behind closed doors.

‘Mining’ My Own Business is on at the Portland Hotel – Portland Room until April 20
http://www.comedyfestival.com.au/2014/season/shows/mining-my-own-business-xavier-toby