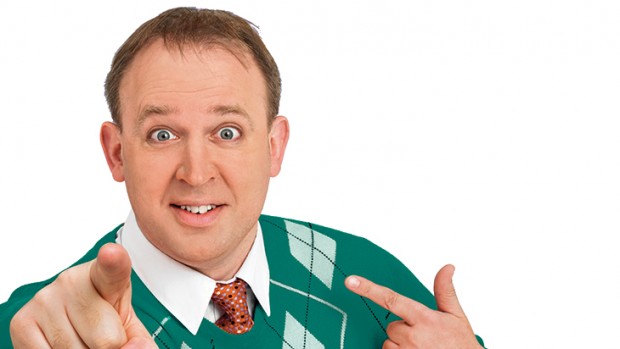 Star of the UK’s The Sketch Show and international Pun-slinger, Tim Vine is back at the comedy festival with another round of rapid fire one liners, clever musical stings and visual gags.

In Tim’s new show, he bundles his usual pun mastery with some conversational audience participation, inviting punters to fill out a questionnaire before the show then inviting those with the best stories to come up on stage. Hence the title The Tim Vine Chat Show.

The first half of the show is Tim at his best. “There’s no satire here, folks” Tim proclaims as he powers through his material. Tim fires off pun after pun scattered with some musical and visual stuff. Although we did miss out on his jump rope gag. “Think i’ll skip that one” he explained. His delivery is childlike and beautifully daggy, suiting his sometimes borderline daggy dad jokes, but the laughter always outweighs the groans. His suit and half untucked shirt only bolsters his style. There’s so much content here, and so much quality, you can’t lose really.

In the back end of the show the chat element comes into play and, unusually for a Vine show, the pace slows. For our performance Tim invites onto stage a Physiotherapist who told of an unfortunate encounter with a Sand Fly whilst overseas, a former children’s entertainer, a Radio DJ with a story of an awkward interview with a language barrier (“A bit like this one” he cheekily sugguested) and a incredibly secretive Transport Operations Manager.

It’s always a risk to entrust a large chunk of your show to the quality of the stories of your audience and i’m sure with the right audience there’s potential for some killer content here, but on this particular night i’m not sure it worked. Tim struggled a little bit to get material out of some of his guests, especially Jeanine the Transport Operations Manager, who just didn’t want to play the game. Tim fell back on some loosely related material to get himself out of a bind on a few occasions. Maybe some games or “segments” thrown in with the interviews would be more suited to his style?

There’s no question Tim Vine is a brilliant, witty scripted comic but his interviewing and improv just wasn’t as strong. It’s a shame as it hampers an otherwise hilarious show. But such is the nature of improv; comedy gold could be hiding amongst your fellow crowd members. Tim’s worth the punt.

The Tim Vine Chat Show is on at the Melb Town Hall – Lower Town Hall until April 20
http://www.comedyfestival.com.au/2014/season/shows/the-tim-vine-chat-show