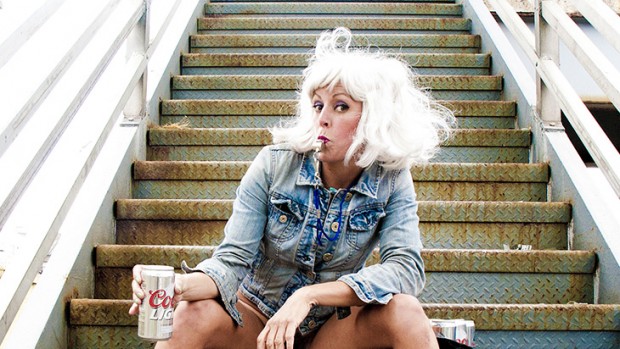 You’ve might have heard about this award winning show; that it is controversial, provocative, brave, powerfully political and, yes, Adrienne does spend a lot of the show naked from the waist down, but you might not have heard that it is also warm, welcoming, silly and adorable. Adrienne’s southern disarming charm reminded me of Dolly Parton and she makes you feel at home from the get-go.

Adrienne is better known as one half of burlesque cabaret act The Wau Wau sisters who have been touring Australia with their show about finding themselves in mortal danger in Queensland but are sadly not doing that show for the Melbourne International comedy Festival. It is not surprising that there is a cabaret / burlesque aspect to this show; some clever strip tease, music videos being projected onto her naked torso and the odd bit of slapstick, but all have a deeper political context about peeling off layers, revealing agendas and laying bare the blind, appalling ridiculousness of misogyny.

At the heart of the show is a comedic deconstruction of the incident in 2012 where Daniel Tosh, in response to a woman’s heckle about a rape joke not being funny said about her “Wouldn’t it be funny if that girl got raped by, like, five guys right now? Like right now?” and then many comedians (mostly male & some even highly respected ones) came out in Tosh’s defence, (mostly missing the point about what was offensive about it). You get the impression that this hour is a direct response to that incident and a clever, comedic form of revenge. Revenge for every woman who has been raped, threatened, intimidated, disempowered, shut down or put down. Proof for this is the fact that the stage is strewn with framed photos of many of the comedians involved, so she can point them out and hold them up to ridicule. Well, by getting involved they were asking for it – weren’t they?

The key to it all for me is at the very beginning of the show when Adrienne points out that only Jewish people can tell Jewish jokes and only African Americans can tell jokes about African Americans. The unspoken implication is that only rape victims can tell rape jokes and I think Adrienne might be subtly telling us something about herself and about the show.

Most of the music throughout, including the house music before and after are songs by men being misogynistic or intimidating sexually towards women. They are pretty toe-tapping, popular tunes. I was lucky to have my younger friend with me point out before the show that we were listening to the notorious song ‘Blurred Lines’ by Robin Thicke. It’s a way of reminding us how endemic and accepted misogyny is in society without needing to say it herself.

Adrienne covers a lot of pretty serious ground but it’s so well written and performed that it is hilarious and a heap of fun throughout. Needless to say Asking for It: A One-Lady Rape About Comedy Starring Her Pussy and Little Else! Is not a show for everyone. But it should be.

Asking for It is on at the Portland Hotel – Portland Room until April 20
http://www.comedyfestival.com.au/2014/season/shows/asking-for-it-a-one-lady-rape-about-comedy-starring-her-pussy-and-little-else-adrienne-truscott-s