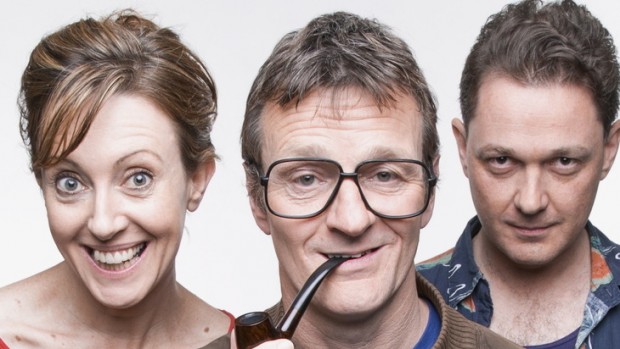 Another weird but entertaining comedy play by Bob Franklin. Although it’s subtitled “The Difficult Second Episode” it also seems to hark back to Bob Franklin (The Librarians) and Steven Gate’s (Tripod) first collaboration Stubborn Monkey Disorder. Could this be the third in Bob Franklin’s Steve & Biscuits Trilogy? They are the main things that all three shows have in common. Stubborn Monkey Disorder was Bob Franklin as reality TV show writer and Steven Gates as his side kick in a rather gothic surreal two hander where the reality TV show gradually came to life. Last year’s Golden Gibbo nominated The Writers where Steven Gates was replaced by two other Steves, Steven Stagg and Stephen Curry in an exploration of the inside of a writers mind.

The Writers: The Difficult Second Episode has a bit of both previous shows, playing around with different writing styles and genres and hinting at darker psychological undertones. It starts with a blackout like Stubborn Monkey Disorder, with Steven Gates back as Bob the writer’s suspicious side-side kick and ex writing partner breaking into the house. Then there are links to last year’s show with the name, the mention of tea and biscuits of course, and that it is a three-hander.

This year Bob and Steven are joined by the fabulous comedic actress Roz Hammond (Mad As Hell) who plays various other main characters. Again there are hints in this show that it is a manifestation of Bob’s mind during the writing process. With Steven representing his guilt and anxieties and Roz playing Bob’s idealised versions of women that come alive in the story. The story itself was often puzzling but became a bit clearer as it went along. Gatesy catches Bob out not only working on a comedy festival show without him but also spending a bit too much time with his ex-wife. Like Bob, it’s fairly slowly paced, absurd, and requires the audience’s attention. There were some patches that felt a bit too ponderous, but it also had some very funny highlights including a short interlude of cabaret from Steven and a deliriously joyful montage.

Although there is not much in the way of a set there are a lot of important sound and lighting cues and everything impressively runs like clockwork. The show over all is very tight and like the previous works is a very cerebral, theatrical piece with a strong British sit-com influence. It’s not as powerful as last year’s The Writers, but I still found many laughs and enjoyed spending the hour with three extremely talented comedy performers.

The Writers: The Difficult Second Episode is on at Melb Town Hall – Regent Room until April 20
http://www.comedyfestival.com.au/2014/season/shows/the-writers-the-difficult-second-episode-bob-franklin-steven-gates-roz-hammond