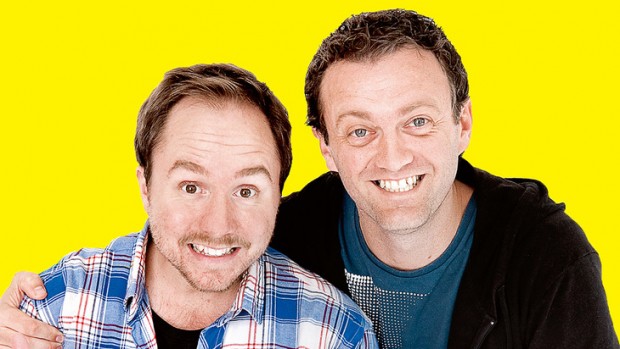 For those not in the know, The Little Dum Dum Club is one of Australia’s longest running and most popular podcasts presented by comedians and mates Tommy Dassalo and Karl Chandler. The show, normally recorded at Tommy or Karl’s place, usually involves a bit of daily life material from the boys before welcoming one or two comedian guests in to… well, talk shit for an hour or so. Whether the boys know their guest personally or not, the vibe is always a loose comedic love-in that feels so inclusive that you’ll think you know the whole gang. And none of this is lost at the live shows, in fact it’s intensified.

For their first 2014 live show, die-hard fans and some bewildered newcomers crammed into a cosy room at Five Boroughs Bar to witness what can only be described as no holds barred chat mayhem. After some familiarities, and a sing along for birthday boy Karl Chandler (who demanded Mousse, and got it), Karl and Tommy welcomed first guest, token “Stupid American” Kyle Kinane. Lawrence Mooney and Charlie Pickering soon followed. The three were welcomed one by one, each getting their time to shine, but it’s when everyone’s in the fold that things really fire up.

The gang spiral into a spectrum of rude, crude and wonderfully offensive topics like suicide, bigotry, pretend Chinese, MH370 and air-crash investigations (Mooney the slightly hungover instigator of this decent into chaos). If this stuff was on the radio there’d be lawyers involved, though Pickering does provide a bit of a moral conscience in this sea of debauchery.

Whilst things seem chaotic, Karl and Tommy always have a handle on things. Tossed in with the general chatter are a few prepared topics and questions, some audience tales from the room or via social media and even a call from Dave O’Neil, all stuff that keeps things running nicely yet never feel rushed or cut off. Any risk of that inclusive, relaxed vibe being stunned by a live audience is dissolved with Tommy and Karl’s masterful crowd work and stage presence; some pretty relaxed and experienced guests doesn’t hurt either.

If you’re a fan of the Dum Dum Club, you have to get down and catch it in all it’s live glory, you’ll feel even more part of the gang, but if you’re easy offended and like your comedy a bit more high-brow, membership might come a little harder.

The Little Dum Dum Club is on at Five Boroughs until April 20
http://www.comedyfestival.com.au/2014/season/shows/live-podcasts-the-little-dum-dum-club