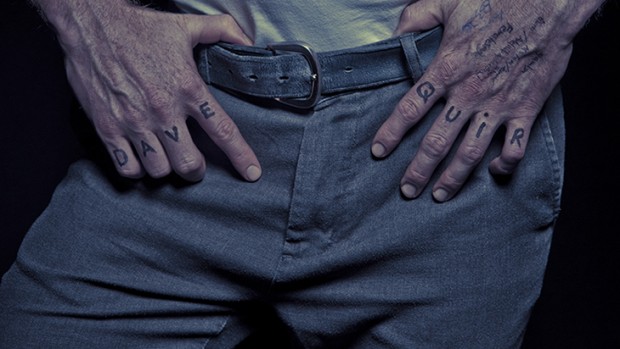 If you want to see a comedy show containing a variety of stories about careers and/or suicide, then David Quirk’s Career, Suicide might be a disappointment for you. With minimal content on both of these topics, this show is a left-of-centre comedic narrative, focusing mainly on skateboards, vegans, and towels. Mostly towels.

David Quirk is an odd character. Confident but slightly awkward. Amusing but with some serious undertones. His humour is in his storytelling, which he does well; he captures the interest of the audience with his epic tales of strange life experiences and funny conversations he has had. His stories are long and entertaining and he builds them carefully, however, unfortunately there is a severe lack of theme and no punchy or memorable endings to many of them.

Entering the stage in only a towel and dripping with water from head to toe, Quirk creates a narrative from the very beginning. We want to know the backstory, and once we know the backstory we want to know how it ends. This particular journey of his is delivered with enthusiasm and wit, but it does not successfully form a strong backbone for the entirety of the show as presumably intended. Most of Quirk’s material is amusing but not laugh-out-loud funny, and that’s alright; the audience remain engaged and smiling throughout. The skateboard anecdotes are witty and original, especially the retelling of a surprising altercation with a crude eight-year-old girl, and a spontaneous semi-striptease nicely breaks up the word-heavy script.

Quirk is a skateboarder, an animal activist and a vegan, as well as being a stand-up comedian, and we become well aware of his passion for animal rights in this show. He has some insightful thoughts about veganism, and tells several jokes about the judgemental questions he is often asked about the assumed consequences of his lifestyle. At one point he does cross the line a little from being sarcastically funny to critical and preachy, and it felt as though we were being berated as a group for potentially (and probably) being meat-eaters. His strong opinions are admirable, but at times it did become more of a speech about his vegan beliefs than an amusing take on our eating habits.

Overall, David Quirk has managed to create an entertaining show. His dry sense of humour and serious nature compliments the content of Career, Suicide, and although the stories themselves do not have any noticeable theme or strong conclusions, the material is clever, well-written and droll.

Career, Suicide is on at Melb Town Hall until April 20
http://www.comedyfestival.com.au/2014/season/shows/career-suicide-david-quirk