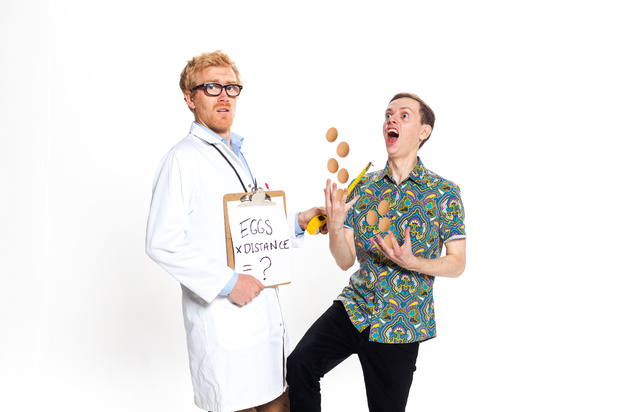 If you were one of those kids who always looked forward to getting the newest Guinness Book of World Records, ignoring the feats of strength or athleticism and just poring over the records for most boiled eggs fit in the mouth or most drawings of a cock and balls drawn on one forehead, then this really is the show for you.

Full of silly, stupid and downright ridiculous stunts World Record Show at the Melbourne Town Hall is an hour of awesome hilarity and shambolic daring from start to finish.

Hosts Andy Matthews, Adam Knox and Dave Warneke guide the thronging audience through a series of mad, bad and dangerous to know challenges which rope in some of their fellow comedians from other show.

First off the rank are Adam and Dave whose bitter rivalry is legend and are challenged to find the Most Adorable Baby Photo of themselves. Adam cheats and is disqualified.

The next challenge involves the evening’s first guests – Jared Jekyll and Cameron James – who disappear backstage to see who can place the most temporary tattoos on their body. They will return later.

The second guest is Jon Conway whose challenge – Most People Broken-up With In One Minute – involves members of the audience throwing tiny glasses of water in his face as he tells each one separately that he no longer loves them.

There are five more ludicrous challenges – including a race to the door wearing packets of two-minute noodles as shoes – before the next guest, Rose Callaghan, is brought on to attempt to create the World’s Best Hand Shield From Cheese Slices In One Minute. Adam Knox wins this round, but precisely what a hand shield is and why it needs to be made from cheese slices is still a mystery.

This is a silly, hilarious show with originality and brimming with ideas performed by three fabulous comedians and their mates. If you fancy some comedy which will most definitely not tax the mind and is utterly hilarious, then this is the show for you.