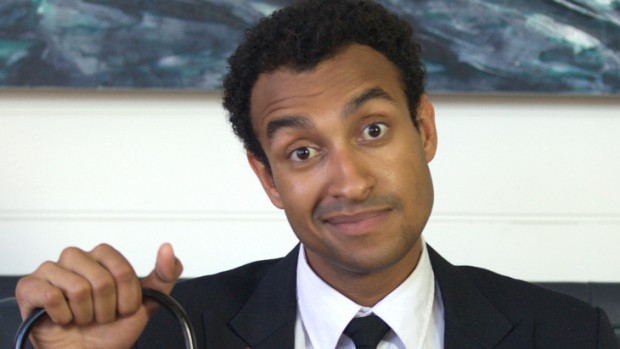 Matt Okine has risen in profile as of late (he’s on JJJ Breakfast, co-hosts ThursdayFC and was on the debut episode of Stand Up @ Bella Union) and after hearing of the acclaim of previous shows and only seeing his short spots, I was curious as to what an hour in his company would be like. The experience can be described in one word – impressive.

Starting out with some gentle banter and various observational routines, he covered topics such as his small role in Neighbours, travelling to the UK, his hatred of clothes shopping and share-house living. Aside from the TV credit, they were rather standard subjects but his colourful descriptions and big stage presence were more than enough keep all interested and laughing heartily. On the surface it appeared to be just a series of random topics save for the frequent exclamations of “I’ve gotta get my life in check!” to link them to the shows’ theme of striving for happiness and how limited finances can create a barrier.

As he reached his climatic story about a messy night at a nightclub to celebrate a well paying job, all the pieces fell into place. Topics covered previously popped up in this story, not just as token call-backs but also some integral parts of the tale giving plenty of context and gravitas. Okine had obviously revised this show to within an inch of its life to ensure that every word had its exact place. This attention to detail paid off with consistent laughter in all the right places.

On stage Okine is thoroughly engaging and energetic. His conversational put everyone at ease and the concepts were universal enough for all to relate. With tricks such as repeating core statements with exaggerated indignation to extract every possible laugh from the line, he had the audience howling throughout. It was almost a masterclass in how themed stand-up should be done.

Happiness Not Included is on at Swiss Club and Melb Town Hall until April 20
http://www.comedyfestival.com.au/2014/season/shows/happiness-not-included-matt-okine