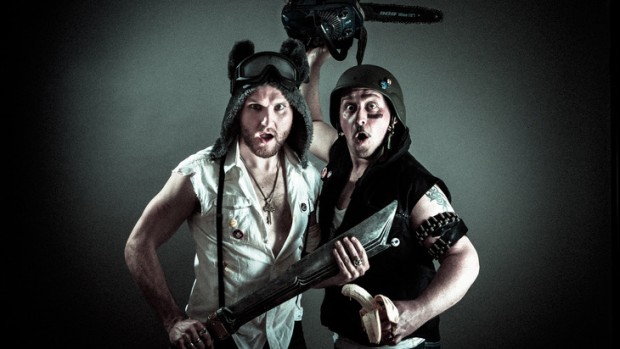 There’s aliens, orphans and even a little magic – Sketch-ageddon is an action-packed hour of doom and sketch comedy. Jason Geary and Jimmy James Eaton have teamed up once again, following the success of last year’s Sketchual Healing, and if their show’s opening music is anything to go by, they still have a large quantity of sketch-related puns in supply.

Eaton and Geary have a wonderful comedic relationship and are both well-practiced at playing a wide variety of characters. The sketches are really well-balanced. There are insanely high-energy moments, like Geary’s bursts of questionable magic. There are comparatively quiet moments of domestic ridiculousness, where we witness the relationship between an alien overlord and his mother. A short mimed tale about two brothers growing up was surprisingly touching. All of the sketches flow beautifully thanks to the story of destruction weaved throughout.

Eaton and Geary accomplish a lot with minimal fuss. Their use of props is sparse, setting up most of their scenes with nothing more than a bit of music. This keeps the show fast-paced and very physical. The whole thing is super slick. Ben Russell has done a great job as director, helping to create a show that feels incredibly natural, but is tightly composed.

The seemingly endless energy of Eaton and Geary is really impressive, especially considering that both of these guys have multiple shows this year – Festival legend has it that Eaton is in seven different shows, which deserves some sort of trophy or finely-laminated certificate if it’s true. They both get a chance to show-off the full gamut of their talents. There’s singing, dancing and impressions. Geary’s Christopher Walken is on-point, and Eaton’s John Travolta is hilarious, baffling and weirdly time-specific.

The only quibbles on the night were venue-related, rather than any fault with the performance itself. The show got started 10 minutes late, meaning there was a trickle of audience members scrambling to get out towards the end, presumably to make it to their next act. It was an unwelcome distraction from an otherwise brilliant finale. Hopefully this was due to an off night and isn’t indicative of the run in general – but maybe leave some room between shows, just in case.

Sketch-ageddon is an epic tale of death and destruction, told in bite-sized nuggets of hilarity. Eaton and Geary are a perfect comedy pairing and not something to be missed.

Sketch-ageddon is on at the Imperial Hotel until April 20
http://www.comedyfestival.com.au/2014/season/shows/sketch-ageddon-jason-geary-jimmy-james-eaton