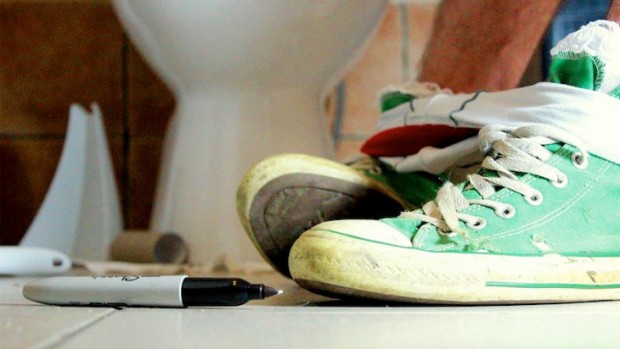 Based upon graffiti found in various public conveniences, Public Toilets Private Words was a wickedly lewd and crude cabaret show starring Caitlin Armstrong, Aloise Maree and Thomas Albert. We experienced all manner of deviancy at a throbbing nightclub, a tango based argument about whether humans have always been obsessed with sex, a discussion on the famous people who had died on the can and the Roman Empire leaving their dodgy exploits chiselled onto the walls of the bathhouses.

Parts of the show felt like a musical form of verbatim theatre where examples of the found text were used as humorous lines in the songs. This proved to be a mixed bag in terms of comedic success. Other items had the theme shoehorned in rather tenuously, an example being the French love affair skit that used graffiti to limply resolve the story. Some very serious monologues, one about Ground Zero in New York and another about the transgender restroom conundrum, were clearly out of place in this comedic cabaret show, but that fact was used in some humorous self-referential banter. At one stage, the cast asked the crowd if a philosophical musing about the nature of graffiti strayed too far into wank (the answer by the generous audience was “not really”).

The set was ingenious with chairs adorned by toilet seats being a major fixture. Mobile partitions that originally started out as a set of cubicle walls were used to transform the set as required.

This was fun hour that explored plenty of crude ideas; understandable considering that 95% of the graffiti found during research for the show was sexual in nature. Those not too squeamish or prudish will have a whale of a time.

Public Toilets, Private Words is on at La Mama until April 13
http://www.comedyfestival.com.au/2014/season/shows/public-toilets-private-words