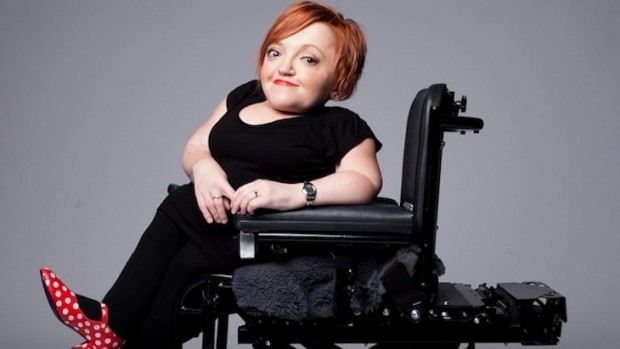 Stella Young has been doing standup spots for a few years now, I saw her early on when she was still finding her feet and several times after that. Then a few months ago I saw her kill at a political comedy night, she was holding the room in the palm of her hand, and was clearly the best performer amongst a very highly skilled group. I knew she was ready for her own festival how. She didn’t let me or the rest of her audience down.

The title itself seems fairly provocative but as Stella points out there is no descriptor for her position lacking in some sort of loaded, negative subtext. Crip (short for cripple) sounds like a cool gangsta name to her and if you’ve got a problem with that, then maybe this is not the show for you but Stella couldn’t care less. She has a lot of fun with language, especially poking fun at ‘politically correct’ language and people trying so hard to be inoffensive but winding up sounding the exact opposite. There is also quite a bit of fruity language threading its way through her tales and one-liners. This is not a show for kids or the easily offended. Stella touches on all the subjects you’re supposed to avoid at polite dinner parties; politics, religion and sex.

The jokes flew pretty constantly and the laughs rolled along non-stop. Stella’s humour is possibly even drier than Judith Lucy’s (which is saying something). She’s cynical, sardonic and delightfully charming. Her Oscar Pistorious gear got a little dark (in a brilliant way) but then she gave us some very insightful stories about the Olympics, including being in London for the Paralympics. A highlight was reading through a hilariously inept children’s book teaching children about disabled kids which took her into various routines and helped break up the show from straight standup. We also learn quite a lot about her life, some of which is fairly unique but some, like having an embarrassing mum, we can all relate to.

Having a director’s outside view and experience help with a show can take it from a lot of well written comedy to a well rounded performance and Nelly Thomas’ direction has no doubt helped in this way.  This is an exceptional debut and I’m not surprised to see that she’s already scored some work on the Agony series on the ABC. Stella may be utilising her comedic skills as a political tool to make people more comfortable around crips, but more than anything else, she is definitely a brilliant comedian.

Tales from the Crip is playing alternate nights at Northcote Town Hall until April 20. There will be an Auslan interpreter Wed 9 & Fri 11 April shows
http://www.comedyfestival.com.au/2014/season/shows/tales-from-the-crip-stella-young-in