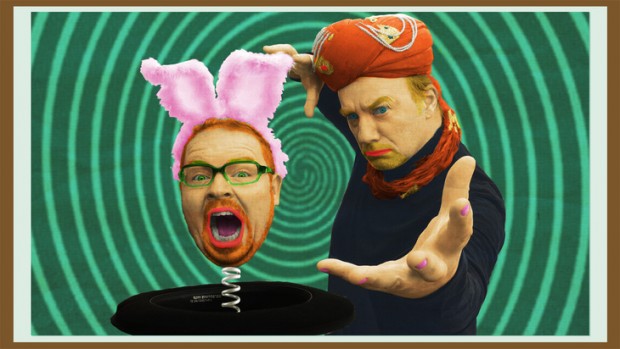 Gentleman actors Maurice Cock and Belvedere Bagg (played by Melbourne comedy stalwarts Ged Cogley and Jamie McCarney) return to the stage with their latest endeavour – the are now the world’s greatest magicians! Making an hour of our life disappear, they fumbled their way through all manner of unrealistic illusions while regaling us with their renowned bawdy repartee.

As you would expect from a Cockbagg performance, there was plenty of toilet humour and lots of innuendo, so much so that you could say that the show had homoerotic overtones. Their wonderfully delusional personas got an even bigger workout with the addition of magic stunts. The duo had to cope with dodgy looking tricks (with equally dodgy props) and hilarious trick failures while comically struggling to maintain the façade of being in control. Their woeful attempts to cover their shortcomings were dealt with in clever and amusing ways. They may not have been up to a Tommy Cooper level of comedic magic but their bumbling through the hour was a joy to behold.

Magic shows generally involve some form of audience participation and this was no exception. “Volunteers” were used in illusions involving mind reading and card manipulation but there was a lot less dragging people up onto the stage than you would expect. One did involve some embarrassing personal space violation but generally the performers were the butt of the joke. In this case, the major role of the audience was to massage their egos by applauding at every opportunity.

The performance was quite loose with the odd erroneous sound cue and the pair often pushing each other to the point of corpsing. Their style of slapstick wasn’t the slickest but was functional enough to suit these haphazard characters. Rather than detracting, this added beautifully to the chaos of the show.

Great effort went into the staging of this show; from the carnival-styled posters to the Consentino Magic Kit proudly displayed next to the stage to the many props with which they weaved their magic. Their elaborate and ridiculous costuming proved that these two comedians were not afraid to make themselves look stupid.

If you don’t mind crude humour, D’Illusional will keep you laughing and entertained. There are no deep themes, just pure unadulterated silliness.