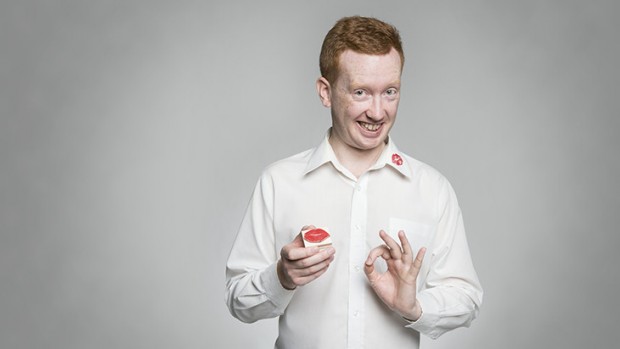 Luke McGregor worries a lot. He worries about burglars and murderers, about being alone in the dark, and about talking to girls and breaking into a sweat. He worries that he is the only person who worries about these things, and he wants to worry less about all of these unnecessary worries.

I Worry That I Worry Too Much is McGregor’s second Melbourne International Comedy Festival show, following on from the success of his 2013 debut, My Soulmate Is Out of My League, which won him Best Newcomer. This year’s production looks like it’s going to be just as popular, with McGregor moving across the road to the Hi-Fi for the final two weeks of the festival, to accommodate an impressive number of ticket sales.

And with very good reason. This show is superb.

McGregor spends just under an hour awkwardly talking about his excessive amount of thoughts, fears and concerns, and we are oddly engaged with every single one of his issues, whether we find them relatable or not. His quirkiness is what makes him such a delight to watch; his exaggerated facial expressions (intentional or otherwise), his nervous noises, and his almost childlike excitement over everything he talks about creates this lovable character that you can’t help but adore. While he definitely uses his oddities to his advantage and plays them up for some guaranteed audience laughter, Mcgregor is honest and self-deprecating, and his self-conscious personality wins over every single person in the room. His idea of ‘banter’ is to ask those seated in the front row how they are, and they quickly warm up to the comedian, with some audience members gladly answering his questions without the usual fear of being humiliated in front of the rest of the crowd.

The most popular part of the show by far was when McGregor discussed his inability to meet girls and his experiences with the dating app Tinder. His theories about the app appealed to quite a few twenty-something-year-old girls in the audience, who seemed to relate a little too well to the Tinder techniques he confessed to using. McGregor knows how to work a crowd. His jokes about his unknown prowess in the bedroom are expertly delivered and absolutely hilarious, and he concludes his show with an original ‘gift’ to each audience member that perfectly sums up how his worrisome attitude affects his talents in the bedroom.

I don’t need to encourage you to see this show. Luke McGregor clearly does not need any help convincing people to see him flurry about nervously on stage. But if you want to see a production this comedy festival that is genuine, modest, and just simply fantastic, then make sure you purchase a ticket now before they all sell out.

Now that would be something to worry about.

I Worry That I Worry Too Much is on at Melb Town Hall – Portico Room until April 20
http://www.comedyfestival.com.au/2014/season/shows/i-worry-that-i-worry-too-much-luke-mcgregor