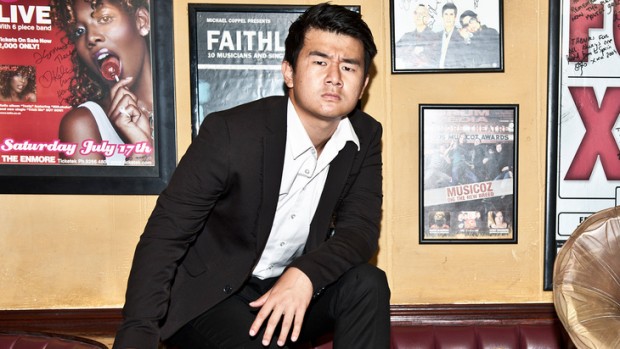 Every year Ronny Chieng has been out-selling any room they can put him in and finally I got to find out why. He is just that good.

The stage backdrop for Chieng Reaction is his name RONNY in huge Broadway type lights that sets the scene for a big, bright energetic performance. The high status character Ronny has created around his own personality has eased into the role of Superstar beautifully and the audience are going with it, not just because of his charm and style but because he has the comedic talent to back it up.

Ronny talks a lot about the fame that has come to him and has some great touring tales, the best is about his family coming to see him perform in their home town of Singapore. There are also a lot of dating stories and we learn quite a bit about his background including going to school in the United States and of course his commerce law degree from the most prestigious law school in Australia. Ronny is on the way to being another comedy heavyweight who gave up medical, architecture and law careers for the life of a jester.

Watching someone being angry about stuff has always been funny but Ronny and his show are a lot more than that. His timing and comedy instincts are extraordinary and he’s worked on his persona so that there is light and shade and some self-depreciation. This was prominent in a fabulous routine about knowing that there will be people in the audience who have been dragged out and are hating his show. It suggests a very healthy outlook for a rising comedian and adds to his delightful grumpy attitude. I also loved an inclusive routine about people in the audience who have organised a group to come see the show. He works an audience impressively well and keeps them on side throughout.

This is Ronny’s third festival show, and although I’d seen him do impressive spots in rooms and on TV I’d not yet seen him do a full festival show, mostly because he’s sold out and I can’t get tickets. It’s a fantastic experience when a performer lives up to the hype, Ronny can certainly bring the funny but this goes alongside a strong work ethic that is always important for anyone serious about a comedy career. He is a born entertainer and will never regret giving up a career in law.

Chieng Reaction is on at The Hi-Fi until April 20