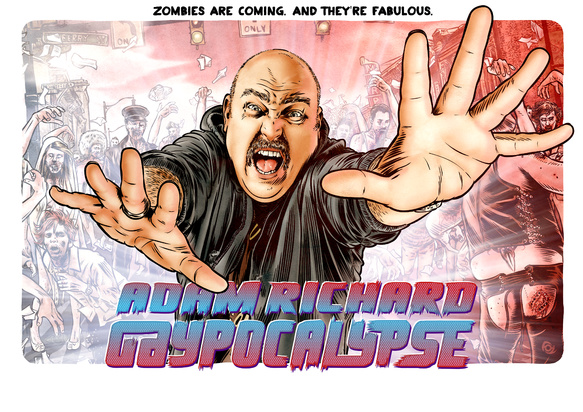 This is Adam Richard as you’ve never seen him before. He’s had a long time to think about the kind of solo festival show he’d like to write now he’s given up spruiking celebrity gossip on mainstream radio. He’s not afraid to get political on our arses. This time it’s personal.

We meet a much more subdued Adam than we are used to seeing on stage. He hints at radio war stories but the significance is that at the end of ten years at his job he was left pondering his future and what it’s like to be left out in the cold with a society that seems full of heartless mindless zombies out to make life more difficult for others.

Adam is still the accomplished comedian able to zing out ripping pop culture gags but he’s also as passionate about gay rights as he is about the rights of asylum seekers, for they are all human rights. There is a line throughout his show about these beliefs that gets a bit too serious at times, possibly because they are too close to Adam’s heart to joke too much about but then the Kardashians suddenly pop up and there is usually another wisecrack or filthy double entendre around the corner to keep the laughs rolling.

The highlights of the show for me were the hilarious stories about his family. The joys of living a mundane suburban life in a gay relationship with a step child, his sister at a rodeo discovering a lot about her own assumptions and his mum proving that he inherited her joy in entertaining others which had me in tears of laughter. I would love a show that is more about that.

I felt that Adam had a lot to say and a lot of funny tales to tell. This might be why the theme became a bit muddled at times. The over the top anti-lesbian rant brought some guilty laughs but seemed out of place in a heartfelt show partly about gay rights. The surprise ending (people know about it now so I’m not giving everything away) was a song that proved that Adam has a gorgeous voice and I look forward to him creating an amazing cabaret show in the future. Meanwhile there was a lot to enjoy in his first festival show in seven years and if you are an Adam Richard fan you know he will bust his butt to give you a great time.

Gaypocalypse is on at the Melb Town Hall – Backstage Room until April 20
http://www.comedyfestival.com.au/2014/season/shows/gaypocalypse-adam-richard