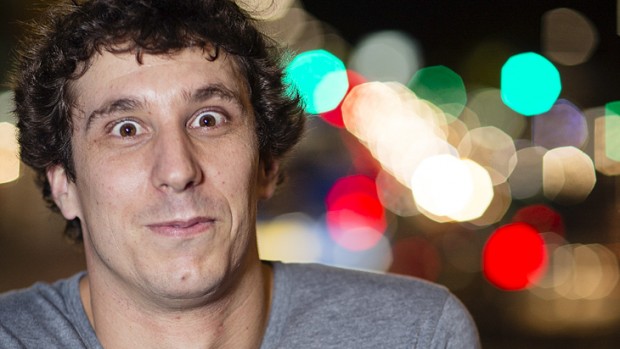 This year the best stand-up shows appear to be those which are structured around a core narrative, usually a personal incident from the performer’s own life. So it is with Daniel Townes’ show at the Melbourne Town Hall, The Other Side.

Beginning with Townes’ describing some truly awful shows he has had to perform during his career as a comic, this is a very honest show with a lot of heart.

The audience are first introduced to Townes’ family – his more successful brother and his loving parents – and how Daniel himself felt drawn to try to be as great as his older sibling. To this end he became swimming champion at his high school and won medals.

This all changed, however, when he discovered marijuana, of which he became a habitual user for thirteen years.

He also reveals his obsessive compulsive tendencies, which he believes did not really help with his attempts to kick his drug habit and just meant he spent much of his earnings on dope, games consoles and games. He also discusses the respect he has for journalists, with whom he draws parallels as they have their own addictions. One of the most affecting sections of the show concerns his various relationship problems culminating in his time with a fellow drug user with whom he eventually broke up after they were witnessed stealing from someone close to him.

Townes is a very funny comedian with a gentle, relaxed delivery style which draws laughs from his audience in a naturalistic fashion without the need for big punchlines or snappy comebacks. This is a funny, touching and frank show with plenty of laughs which had everyone present engrossed in the unfolding tales which alternately amused, saddened and intrigued. The structure is well thought through and Townes proves a highly sympathetic character throughout never once prompting the audience to sit in judgement, but to just listen and perhaps empathise.

Townes has made it through to the other side and is a different person to that which he describes throughout his show. Disarmingly frank and laugh-out-loud funny, this is a show I would recommend highly.

The Other Side is on at the Melb Town Hall – Backstage Room until April 20
http://www.comedyfestival.com.au/2014/season/shows/the-other-side-daniel-townes