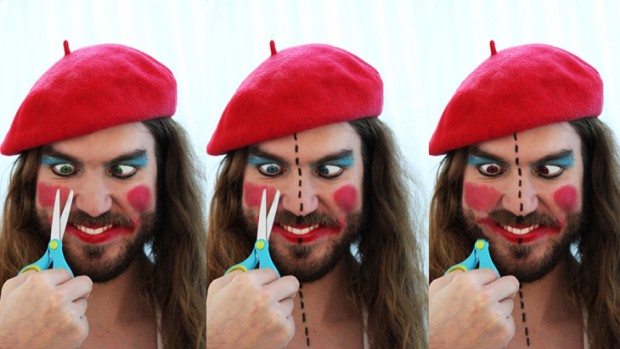 Dr Professor Neil Portenza is an eccentric, erratic, clown-esque character living in a world constructed entirely by his own spontaneous machinations, grievances and curiosities. Portenza hastily presents us with sort of planned bits of the show; a ribbon routine, sketch artistry and more, then asks us to score them out of ten. The audience grows ever bolder in expressing their opinion as the show progresses. At any stage someone will be plucked from any part of the room to take on a role in proceedings.

Many of us have difficult relationships with audience participation. No one feels safe from being inculcated in a Portenza show. He projects an aura of chaos that in no way puts audience members at ease about being able to predict what is being asked of them. It’s not clear if Ladgrove is entirely sure either. Some of his interactions are friendly, some are less so, though all are playful. But it’s the element of danger that enthrals people and brings them back again and again, and has packed out his show most nights so far this festival. Portenza pushes boundaries with just how he’ll interact with people and the effect is mesmerising and traumatizing simultaneously. The word of mouth about this show is disseminating like a virulent strain of tuberculosis. There’s one thing for certain, a Portenza show reminds you quite abruptly that you are alive.

We also meet some of Ladgrove’s other characters; for those playing along over the years it has the feeling of the next exciting instalment of a well-loved series. We meet Stavros, the fully sick bro, and Gary Portenza; Neil’s evil twin brother, who perfectly encapsulates the spirit of the quintessential evil villain. All of Ladgrove’s characters posses an air of being both endearing and dangerous.

Some describe what Ladgrove does as anti-comedy; which begs the question what is comedy? But that goes some way to expressing that Ladgrove’s shambolic, spontaneous, exceptionally interactive show steps away from conventional scripted set-up and punch-line performances. In any case, the crowd loudly squawked with laughter the whole way through.
The atmosphere in this show is electric. It is advisable to get tickets early.

Dr. Professor Neal Portenza is on at The Tuxedo Cat until April 20