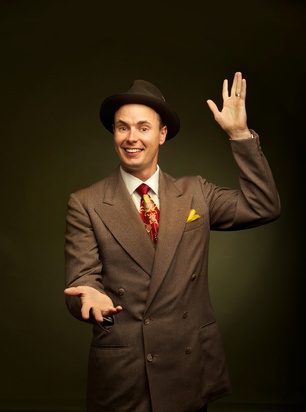 2013 wasn’t a great year for Asher Treleaven. Publicist troubles, a horror gig, and a particularly heinous review made for some low times. Good thing he’s an ideas man and is ready to get back on top. In ‘Smaller Poorer Weaker Cheaper’, Treleaven plots his comeback via some dodgy business proposals and some entirely healthy processing of criticism. The result is an incredibly funny show that had me in tears.

‘Smaller Poorer Weaker Cheaper’ is soaked in the intense enthusiasm of someone desperately trying to turn things around. Before the show even begins, you can hear Treleaven belting out Sinatra behind the curtain. Once things get rolling, exuberant cries of “Woo!” and vigorous fist pumping punctuate quieter moments of the show. The mood Treleaven creates is wonderfully unhinged. He addresses the crowd like a sleazy used car salesman as he tests out some of his proposals to make a quick buck or two. The props fail, the party tricks go awry – it’s all so gloriously shambolic.

As always, Treleaven’s wit absolutely shines in this show. There is a perfect balance of cleverness and silliness. His physical comedy is outstanding, whether he’s crushing his thirst like a man, performing a bizarre nautical dance number, or simply lunging about the stage for emphasis. Treleaven re-visits some older material – his bogan version of ‘My Favourite Things’ makes an appearance, however it works in the context of the story he’s telling and is just as hilarious this time around. The new material never skips a beat –except when it’s meant to. An extensive rant against a poor review for the show is a rage-filled highlight.

‘Smaller Poorer Weaker Cheaper’ is an absolute must-see. Asher Treleaven is a unique comedic talent, and this show has one of the best finales in the Festival. It’s a spectacle that you really shouldn’t miss.

Asher Treleaven – Smaller Poorer Weaker Cheaper is playing at the Portico Room at Town Hall and The Swamp at the Gin Palace until April 20.