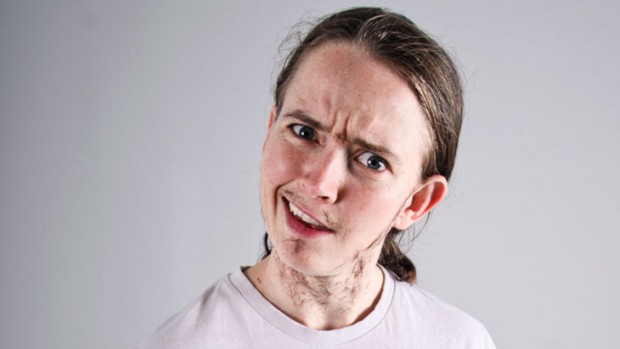 Dave is the antidote to the flogged-to-death clichés of blokey comedy. Coombs Marr has penned the perfect parody of a genre we are unfortunately all too well acquainted with. If you’ve ever stepped foot into a pub comedy night, an open mic night, or comedy dungeon, or watched an episode of the Footy Show you’ll be familiar with the sexist, homophobic and blokey tropes Coombs’ character Dave throws at us. This is a space to laugh at how unfunny some attempts to be funny are.

This show tumbles downward into an inescapable hole of tragi-comedy, as Dave runs out of material, panics, turns on the audience, and commits about every major gaff you can think of for a performer to undertake. He grows increasingly disillusioned with his heroes. He accidentally reveals facts about himself which start chipping away at his projected masculine persona. You’re watching a train crash in slow motion. Never has catastrophe been more delightful to encounter. This is a show you watch between fingers covering your eyes while squawking loudly with laughter.

Coombs is an excellent actor. Dave has depth, timing, a full gamut of expressions, and excellent physicality. Every thought Dave has is projected to the back of the room through Coombs Marr’s facial expressions. Coombs Marr plays with irony, cliché, assumptions and the delicate sensibilities of the audience to great effect.

Coombs Marr sets up expectations then knocks them down again. This show is packed from start to finish with surprises. Coombs Marr goes far beyond presenting ironic parody and supports the concept with a well developed character we end up empathising with. She’s also created a plot packed full of twists and turns. This is a bloody masterpiece. Comedy needed this. This is a packed hour of insightful, hilarious, absurd and uplifting comedy. Don’t miss it.

Dave is on at the Tuxedo Cat until April 20
http://www.comedyfestival.com.au/2014/season/shows/dave-zoe-coombs-marr