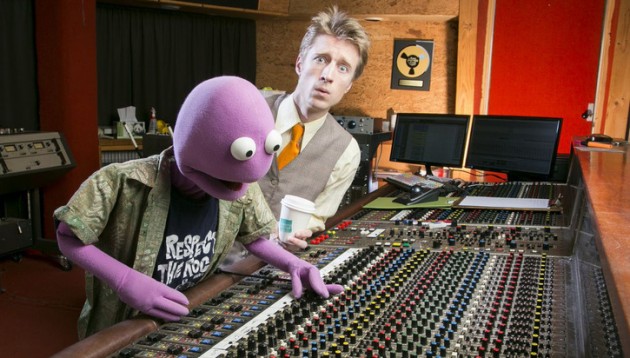 Sammy J and Randy the puppet are back this Festival, with an all stops removed adventure in comedy.

There’s nothing like a tour to test the friendship of the most resolute duo. In this performance we hear of the phobias, the tricks, the grievances and the good times Sammy J and Randy have experienced in this; their difficult first album tour.

You can expect a delightful cocktail of the Sammy J and Randy branded duets, banter, and audience interrogations. Randy the puppet, with his purple tampon-shaped head and exasperated persona has been friends with Sammy J since their unemployed no-hoper university days. Sammy J, upright, clipped, and besuited, takes to the keys, his trusty juice box always within reach. The two challenge traditional ‘straight man, funny man’ formulas – both taking turns to challenge the patience of the other and the direction of the show. The two flirt with Randy’s identity as a puppet- sometimes destroying the illusion, sometimes pushing it to new (naughty) levels. The dexterity with which the two perform is phenomenal; it was sometimes easy to forget their was a man operating Randy from beneath the curtain (spoiler). Randy’s physicality is pretty amazing; transcending Sesame street norms, and wandering into delightfully adult territory for a puppet.

The many musical numbers are a highlight in this hour. Themes wander all over the place into deliciously original material; the existential angst caused by the census being an example . The only criticism that could possibly be made is the claim to have achieved nothing with their lives was at odds with the salubrious grandeur of the Forum from which they performed to an adoring audience who had packed out the venue.

This is an exceptionally tight performance. Fast paced, furiously cheeky and very witty; get along to this packed hour of entertainment before the end of the festival.

The Difficult First Album Tour is on at the Athenaeum Theatre until April 20
http://www.comedyfestival.com.au/2014/season/shows/difficult-first-album-tour-sammy-j-randy-s