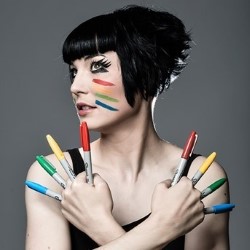 Ellipsis is based around a fight with her self-doubt (voiced throughout by noted comic Phil Nicol). There are a lot of props used to hilarious effect and, at one point, one of the props fought back! The middle section, with puns, was full of groaners. The Wheel of Annoyance (I’m sure you get the idea of how this works) had some very funny stories attached to each irritating annoyance and although her wordsmithery paints some great mental panoramas for the audience,  I really wanted to see a picture of her sitting in the Burger King chair.

Bright, vivacious, bubbly, animated and engaging are all words that could be used to describe Bec’s show, but I prefer the word hyperactive. I can’t go into too much detail about the show as it’s too fast and changeable for a close analysis, but if you love seeing someone giving their all to make you laugh then you have to get a ticket for this show.

The room was small and full, there is a fair amount of swearing (filthy audience!) so it’s perfect for teenagers, old people, young people, anyone who likes a laugh and anyone who thinks Aussies are funny. So anyone really.

Bec Hill is performing Ellipsis at The Gilded Balloon. for Tickets and more information go to the Edinburgh Fringe Website