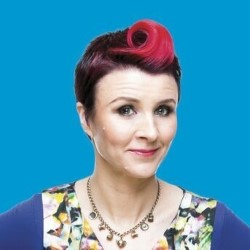 Cal is originally from New Zealand and I first saw her perform live at her 2001 Melbourne Comedy Festival debut show for which she won the Best Newcomer Award. She impressed me then with her comic timing and well written material and she has improved every time I have seen her. Cal has one of the fastest comic brains I have seen and she’s created a smart and wildly creative crowdpleaser.

It Could Have Been Me is based around a series of characters that Cal thinks she may have become if she had made different choices in life. Using minimum costume enhancements Cal presents us with a collection of colourful characters including a bitter children’s entertainer (it’s amazing how hypnotic those little balls on springs that people put on their heads can be), a widow who married a famous womaniser, a feminist spinster poet and a male sex-pulp-shlock science fiction writer.

Cal is a warm and friendly comedian and proves herself to be a suprisingly fantastic actress. Not only in the simple way she transforms into engaging characters but in giving the allusion that the show is getting out of hand when she clearly has everything under control, the sort of thing that Lano & Woodly performed to perfection. The show especially appears to veer out of control when the characters turn on their creator, to dispute what Cal does with their lives, placing the audience on the edge of their seats wondering where things are going to lead. There are also some impressive props used in the show which also start to get out of hand in a very funny way. The couple of songs used were integral to the show, but I could have been the only one to recognise the Australian one hit wonder What About Me by Moving Pictures.

The room was large (around 200 seats) and was full. The laughter was constant and loud, but the two ladies behind me were well over the top as they were close to wetting themselves at some points in the show. Phil Jupitus was also in the audience and he was clearly enjoying it too. It has been a while since I have heard so much loud spontaneous laughter for a fairly unknown (in the UK, at least) comedian and it made me feel a twinge of pride. If you’re thinking of coming to see this show, BOOK NOW, and consider wearing (Tena) protective undergarments just in case your laughter gets out of hand.