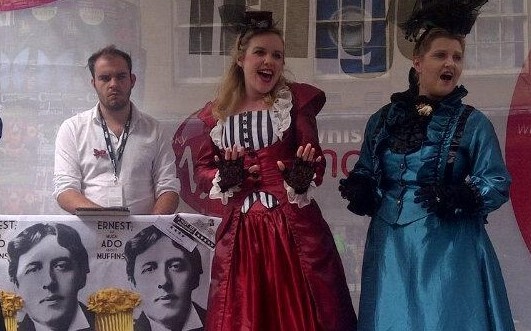 A musical retake on the classic comedic farce The Importance of Being Ernest by Oscar Wilde, where young Jack and his friend Algy find love and learn that a name can be very important in the art of love. The play is in two halves, with the city set finding Jack proposing to the elegant Gwendolen, who believes his name is Ernest, as he uses this name when gadding about in town to stop any rumours of impropriety reaching his quaint country house.

The second half, set in Jack/Ernest’s country house, sees Jack’s friend Algy pretending to be this exciting rake Ernest to seduce Jack’s cousin Cecily, who clearly likes a bad boy. Literature’s most famous dowager Lady Bracknell, Gwendolen’s guardian unravels the romantic tangle that ensues and, just like in a Gilbert & Sullivan operetta, all is resolved amicably for a rousing chorus at the finale.

The room for the show was a 60 seater and, on 2 for 1 Tuesday, was sold out. The music was supplied by a keyboard player at stage right (or left?), but unfortunatelyI found that the music was often louder than the singers. The acting was all professional and the comedy well timed, with good costume and prop work, although I did think the shoehorning of the muffins was a little desperate (and only there to justify the show’s title).

If you are after a show for just before lunchtime (11.45-12.45), this is one for the whole family. No swearing or anything else likely to offend, but lots of laughs, songs and (small) dance pieces on the tiny stage.

Ernest; or Much Ado About Muffins is on at C Cubed for tickets and info check out the Edinburgh Fringe website: