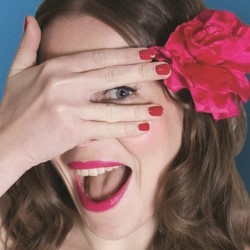 This is Juliette’s second solo show at the Fringe, and follows on from last year’s excellent When I Grow Up, in which she recounted some of her life story and body image and associated mental health issues. This year, Look At Me asks what does beauty mean, and how influenced are people by what they, and the people around them, wear? Juliette dons a variety of costumes and is filmed wearing them in public spaces (Covent Garden and King’s Cross in London) to gauge people’s reactions. The first costume may have looked wildly out of place when Juliette was wearing it but, having worked nightshift, I can assure her that if she was been out in those clothes at midnight, no-one would have noticed her. Each costume (sexy, covered, old, male, alternative) has a story which relates to Juliette’s life.

The show, using the video pieces and a number of engaging on-screen interviews and pictures plus some audio, covers Juliette’s teenage years, when she went from a 4 stone anorexic to a 21 stone bulimic to being sectioned for mental health issues and, while being a harrowing journey, is made uplifting by the performers eloquent delivery and the fact that Juliette is standing there being able to talk about her life and still surviving, which is the main point of the show.

This is one of the difficult shows to review, as though it does have a lot of jokes and it does give the audience something to think about after they leave, it might not be for everyone, (like those looking for a frothy party type Festival show). It should be for everyone though and the packed crowd’s reaction suggests it is a crowd pleaser in its own way. Certainly if you’re into thought-provoking, confessional and, at times, painfully honest comedy, then you must see this show. The room is small, hot, sweaty and was sold out. Juliette may have to move to a larger room at some point to accommodate the demand, I predict.

PS Beauty is a state of mind.

Juliette Burton is performing Look At Me at The Gilded Balloon for tickets and more information check the Edinburgh Fringe website: