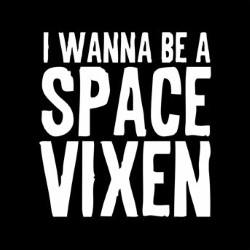 This is a tale of black murder, love, lust, revenge and justice told in song and dance, with loud rock music, flashing lights, smoke machines and sparkly costumes with a sexy cast.

The story concerns Saucy Jack, who has a tavern on another planet. His cabaret singers keep turning up dead just after they tell Jack they are leaving for better jobs (not much of a spoiler, as early on we see the blood on Jack’s hands at the same time we learn of the Slingback Killer). His employees all dream of a better life, away from Saucy Jack’s, but until the Space Vixens (the galaxy’s enforcers of justice) turn up, it seem they are trapped under Jack’s spell. The problem is that one of the Vixens may have a bit of a past with Jack, which means she will have to choose between love and justice.

This high energy show is performed cabaret style, with the stage at one end and the bar at the other, and the characters moving from one to the other throughout the show. The audience sits at tables along the sides, with extra chairs behind. The show starts at 11pm, has an interval halfway and finishes just after 1am (I snuck out at 1:15, while the cast and my fellow audience members were distracted jiving away to Dancing Queen – it could still be going). I had trouble hearing some of the words in the songs due to the loudness of the music and it was a little disconcerting having all the speakers at the stage end, when the action was taking place at the bar end but, apart from that, this was a fast, funny, sexy and toe tapping show that is well worth seeing. I did notice a couple of people down the front were returnee’s, they were dancing and singing along with the cast throughout. So it definitely has the repeat factor.

The cast all sang, danced and acted equally well, and I was amazed at how well they could move in those platform boots, wearing tight skimpy costumes with tall elaborate headpieces. Of course, as this is the far future, gender is unimportant and love is a flexible concept (it’s very LGTB friendly), so if you’re easily offended by adult themes, loud rock and disco music, smoke machines or sexy talk, maybe you should have an early night instead. Everyone else should be here, with a little sparkle in their costumes and their dancing shoes on ready to boogie the night away, at Saucy Jack’s.

Saucy Jack and the Space Vixens is on at Just the Tonic at The Caves.
For Tickets and more information go to the Edinburgh Fringe Website: