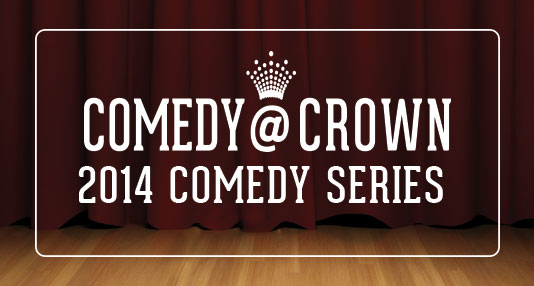 Earlier this year Crown Casino put on a Winter season of comedy in its Groove Bar and they had the smarts to get Justin Hamilton in to help put the night together. Hammo’s reputation brought the hardcore comedy nerds in (like me) and Crown brought a relatively different comedy crowd that you might not see in a dark Fitzroy dive but appreciates good comedy none the less. The lineups were, as expected, exceptional and everyone had a great time.

The good news is that comedy is back at Crown for Spring. It’s a four week season curated and hosted by Justin Hamilton that goes til November 9th. Performers coming up this season are a great mix of established and up-and-comers including; Tommy Little, Michael Workman, Anne Edmonds, Hannah Gadsby, Kate McLennan, Geraldine Hickey, Frank Woodley, Michael Chamberlin and Rob Hunter.

It is a truly wonderful thing that Melbourne has such a vibrant, varied live comedy scene at the moment, with everything from tryout nights, cosy established pub rooms, to really out there kooky variety comedy nights and impro and then high end mainstream places such as Crown. It gives a lot of choice for punters and performers alike, newbies have a variety of places to start and to aspire to and experienced performers have places to try out stuff and also do a well paid gig.

Comedy @ Crown has a great atmosphere, with a convivial crowd ready to laugh. The room has two bars and a choice of chairs and some couches. The venue is easy to get to, close to the CBD with undercover parking and lots of pre-show food choices nearby. There is also a Groove Bar snack menu.

If you usually only see one or two shows a year during the comedy festival this is a great place to get a taste of the style of performers who you’ve never seen perform live standup or may not know so well.

Justin Hamilton was kind enough to talk to me about this relatively new Melbourne comedy venue.

L: How did Crown recruit you to curate their new comedy night?

Justin: Crown approached me after seeing a few shows at The Shelf.  Crown Entertainment realised they have a thriving comedy scene in their backyard that they could showcase in an upmarket environment so we sat down and made our plans from there.

Lisa: How does the room work?

J: I wanted the night to be the sort of show that not only shines a light on our biggest stars but also helps introduce some of the younger acts to the types of gigs they may not see on a regular basis.  If you want to make a living in Australia you have to be able to work all types of rooms and this is a good opportunity to help open up those types of markets to newer acts while bringing in the big guns to headline.

L: The first season seemed like a roaring success, did you and the venue people learn from that season and fine tune things for this season?

J: Without a doubt.  You should always be attempting to improve no matter how successful.  We’ve cut back from the three brackets to the two as since it is on a Sunday night it means the night finishes just a little earlier for the punters.  It is fine for us comedians staying up to all hours but for real people working real jobs it was finishing just a little late.

L: With performers clamouring to get up at The Shelf, have there been some performers (or even punters) who don’t like the idea of performing at a Casino?

J: I’m certain there are but nobody has said anything to me.  That is how the industry works.  You bitch about it until it is offered to you.  Then you usually say yes.  Everybody who has done the gig has had a pretty easy time of it.

L: How are the performers coping with the flames going off on the hour?

J: It is surprising how little happens.  It was a concern going in but our audiences have been so good that they’re locked in and appear to be a little annoyed if a comedian goes on about the flames for too long.  They’re a pretty focused audience.

L: Has it been interesting for the performers to perform to a more mainstream crowd?

J: Maybe for the younger acts but for the rest of us it is business as usual.  Most comedians are happy to do the same type of set for any type of audience.  You just pull them into your world rather than going into theirs.

L: Have you noticed a new type of regular turning up to these nights?

J: More people dressing up for the gig.  That has been interesting.  Not quite as laid back as you would see at your normal gigs.

L: Where did you get your inspiration, in running a good room? Did you seek advice?

J: My inspiration comes from my Adelaide days when Lehmo and I started running rooms to stop Adelaide promoters from ripping off the local acts.  You just run a room in a manner that suggests you might like to perform in it.

L: Do you enjoy the flexibility of doing short season runs of rooms as opposed to running them year round?

J: Sure do.  I wouldn’t run a room all year, too much work and not enough gratitude. I know that from my time in charge of The Rhino Room in Adelaide.  I tip my hat to the Karl Chandlers and Steele Saunders who run rooms and perform year in year out.

L: Is there a disadvantage of some people missing out because they may not find out about it til late in the run or afterwards?

J: Then they can come along next season.  We’re not entitled to see everything that ever happens.  It is good to miss out now and again.

L: Do you have any advice to anyone considering running a comedy room?

J: Don’t be an arsehole and make certain you provide space in the line up to get your own stage time.

L: Will there be more Comedy at Crown in the future?

J: If it continues at this pace for the rest of the season I would say there would be.

Comedy @ Crown takes place in the Groove Bar at Crown Casino Southbank on Sundays at 7.30pm.

Tickets can be bought at The door from 6.30pm for  $20. This Spring Season finishes on Nov 9th

To find out more about Comedy @ Crown, check out their website http://www.crownmelbourne.com.au/Comedy-at-Crown/