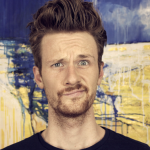 Tim Driver started out his show by stating that he was primarily a writer, not a stand-up comedian. Some may have seen the reading from typed pages as being a performer too lazy to learn his script but it certainly gave this show a literary air and something to differentiate him from the stand-up world. Driver sells himself as being like David Sedaris and that certainly was an accurate description. Like Sedaris his live performance was primarily based on the reciting of humorous stories. Driver’s material trod similar ground in which his past formed the basis for many of the anecdotes but he presented them in his own voice.

Stories about the tribulations of a school camp, the trouble with being easily distracted and the complex conversations he endured about his dietary habits enthralled the audience and kept them laughing at regular intervals. These essays had well-paced humour even when they explored some rather dark subjects. He painted some wonderful images of the jumbled thoughts in his head. You could tell that his writing read aloud as brilliantly as it did on the page.

He added lots of clever touches to his stories with some call-backs to previous essays, asides to the audience to gently mock us and plenty of random thoughts to emphasise the neuroses that we discovered throughout the show. Rather than pull us out of the story, they enveloped us further into his world. These often gave the illusion of spontaneity which added plenty of life to his script.

In spite of minimal staging he was able to create plenty of colour and movement, not only by his animated delivery and gesturing but by acting out parts of an essay. It was a little clunky at times but was charming in its awkwardness.

The essays were broken up with some segments to prove that he had more strings to his bow; a character piece, a brilliant monologue delivered sans paper and even a bit of comical dancing. In a complete change of pace, Driver presented some improvisation which, in spite of his attempt to lower our expectations, was a triumph. Our suggestions were used to create Off-off Broadway musical numbers that were performed A Capella. His beautiful voice captivated the audience and he was able to cram the songs with plenty of surprising and amusing ideas to boot. Not bad for “just a writer”!

Driver has created a show immensely intimate, charming and amusing. It’s definitely worth checking out.

Where Did This Bruise Come From? is on at Highlander Bar until March 28th.