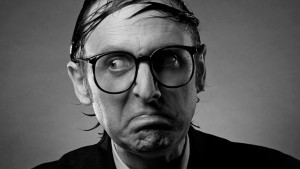 As he shuffles onto the stage at the Portland, Neil Hamburger (Gregg Turkington) cuts a tragic figure. His oily comb-over is slicked firmly to his skull, the four drinks he cradles in the crook of his arm slosh over his tuxedo with every movement he makes. The expression on his face is pained, his spirit already as deflated as the balloons that are scattered across the floor. This is America’s Funnyman – a monstrous congealment of every hack comic that’s played a dive venue for booze money in the last 50 years.

Hamburger is a magnificent creation, simultaneously hideous and hilarious. His jokes are filled with pop culture references at least a decade old, taking shots at the likes of Gene Simmons, Paris Hilton and Blind Melon. Vile, convoluted set-ups lead to baffling, filth-ridden punchlines, all punctuated by Hamburger hawking up a seemingly endless supply of phlegm and whimpering pitifully. What may have once been signs of showmanship in Hamburger are now pathological ticks of delivery, his catchphrases nothing more than whining drawls directed at the floor. As you watch, you can feel the soul-crushing history of his career.

This is a show for comedy masochists. It’s a chance to wallow in the stinking morass of comedy at its most repugnant. The audience was almost disappointed on the odd occasions a well-crafted joke came along. One audience member actually exclaimed, “Hey, that was actually a good one!” after a particularly funny joke about hummus. However, rest assured, these moments are few and far between. Hamburger harbours nothing but contempt for his audience and himself. When the jokes don’t work, the blame lies squarely with the punters, and abuse is doled out accordingly.

Both painfully funny and just straight-up painful, ‘Discounted Entertainer’ is a very unique comedic experience.  Take a chance, brace yourself and you will be rewarded with one of the most brilliant acts going around this festival.