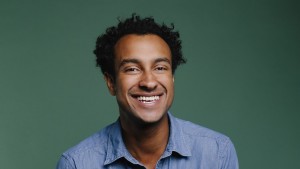 This year at the Melbourne International Comedy Festival I have made a conscious decision to see a broader range of comics than in previous years. For me, that means attending performances by some of the more established names rather than limiting my viewing to the smaller shows and venues, and this is proving to be quite an enlightening comedic journey as I discover what makes these other comics so popular.

Yesterday I took myself to Matt Okine’s show ‘The Other Guy’ at The Victoria Hotel after seeing some of his stand-up on a TV show and finding myself wondering why I had never been to see this clearly funny man. This would prove to be a welcome variation in my already eclectic comedy diet with his style falling somewhere between my usual fair of weird and wonderful surrealism and the more straightforward forms of stand-up with feedlines and punchlines.

Okine is known to many people in this country for his work as a host on breakfast radio and this informs the beginning of his show where he talks of people asking him when he needs to be awake; don’t the hours bother him and how crazy it is.

Clearly a confident and polished performer, Okine engages the audience with tales of online trolling, and how social media has made it easier for people to directly let performers know just what they think of them – often in unnecessarily blunt terms. His joy at finally earning a wage which allows him to indulge in luxuries such as eating proper food is wrung for every ounce of humour it is worth.

An important factor in Okine’s appeal is his open and friendly personality which lends an honesty to his performance as he visibly cringes at the thought of some of the things he might say next. This is particularly evident during the central piece which concerns his relationship break-up and reminiscence of early love when at school. The latter in turn leads into some very funny asides on the nature of racism and the apparent differences between how the wealthy and the poor express their racism which had the audience laughing along in thoughtful recognition.

Okine makes excellent use of metaphor throughout his show and has excellent narrative structure, connecting the various parts of the routine smoothly and without the need for awkward segues. His recounting of his attempts to get back into the dating scene using social media are simultaneously hilarious and awful to behold as he details each awkwardly embarrassing misstep and misunderstanding.

The comedic situations mentioned here are not only funny and recognisable, but engender sympathy for the awkwardness and uncertainty of each one. His musings on the nature of body image amused those present whilst also hammering home a few truths.

Overall this is a great piece of comedy from a comic who isn’t afraid to wear his heart on his sleeve and let his audience see him at his most vulnerable.

Matt Okine – The Other Guy is playing at the Victoria Hotel, Little Collins Street until 19th April.