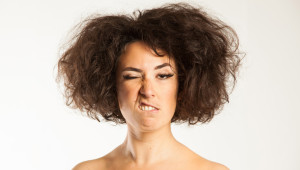 Tessa Waters is a stunning physical performer, I have previously loved her in her debut solo Comedy Festival show How to Be a Lady (2010) and in the impressive Sexytime (2011) with Kai Smythe, a celebration of sex which I raved about to anyone who’d listen. She’s been honing her skills while living in the UK and her clowning/dance solo show Womanz has won her acclaim and many awards including best Comedy at Melbourne Fringe. I could not have been more excited to see her triumphant return to Australia, but unfortunately I found it a bit too patchy.

Womanz has an incredibly strong opening with an over the top Creation Story that gives a back story to Tessa’s character she calls Womanz. It was a pity that Tessa’s self-described “Dance Spectacular” couldn’t stay at this level of awesomeness throughout. There seemed to be an enormous amount of faffing about. This began after the intro when she started moving the audience about into different seats. I ended up in a more uncomfortable spot squashed against a cold wall with poor sightlines and was so stressed it took quite a while for me to get my mind back on the show.

There also seems to be way too much time between the major dance set pieces where she just stalked the stage staring at the audience saying ‘what’s happening’. Her charming, forceful personality could only push this so far before it became a bit dull. ‘Are you Bored?’ she asked me. She’d noticed. It was impossible for me to be honest but now I can say, actually I was a bit. She worked hard to win me back and did to a point, because I genuinely like and admire her talent, but the show itself just did not have that special something that I’d hoped for and, considering all the awards & hype, had kind of expected.

This could have been a really hilarious exploration of being a brave brassy woman and most of her dance numbers went close to this but instead it was a handful of often very funny dance numbers with a lot of empty space in between. It could be that Tessa having an off night, but some sort of script that suited her well thought-out dance numbers would’ve made things whizz by a bit more smoothly. The show led up to a dance class where she got all the audience on their feet and learning some classic moves. Audience members were encouraged to share their own moves with us and Tessa took us through an enjoyable dance class which everyone could approach at their own level. Encouragement without any pressure  was appreciated and it was a lot of fun.

If you are up for a gorgeous woman in a splendiferous spangled corset sharing the joy of her body of work with you this could be a great night out. With a touch more work this would be great show to take a group of girlfriends and some glasses of bubbly to. A comical celebration of dance and womanhood with sparkle and spice. Just let the worries of the weekend go and give in to the rhythm.

Tessa Waters – Womanz is on at Melbourne Town Hall in the Lunchroom.