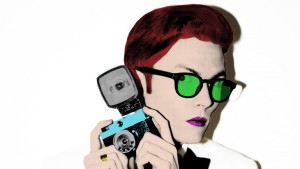 Rhys Nicholson has inadvertently created a new superhero as he sashays onto the stage and declares himself to be ‘supergay’.

His show ‘Forward’ has an apt title. This is comedy which is very bold in its presentation and unashamedly camp. It is also an indication of how far the comedy scene has come from the days of Rodney Rude and the only time when non-heteronormative lifestyles were mentioned was usually with a knowing wink, a bob of the wrist and the word ‘Poof’. Like other modern, openly gay comics Nicholson wears his sexuality with marvellous theatrical flair. His entire image is meticulously coiffed and besuited and with his razor cheekbones, slender body and pale white skin he has been referred to by others as ‘The Thin White Duke of comedy’ in reference to David Bowie’s former appellation. Others have physically likened him to actress to Tilda Swinton, so perhaps ‘Thin White Queen’ would be a more appropriate nickname.

Nicholson takes his cues from his own life and growing-up as Gen Y and gay in rural Australia, where his boss at the supermarket in which he worked as a teenager would pointedly have him stocking shelves with packs of fudge. This type of experience helped inform his decision that he never wanted to have to do ‘proper’ work again if he could avoid it. This means, though, that he says he has no appreciation of work and cannot just come on-stage and start asking people what they do for a living like other comics because he has no reference points from which to react.

His stage presence is well-practised and he clearly knows how to keep all eyes upon him as he prowls from one side to the other, issuing hilariously sarcastic and bitchy lines on each topic he touches upon. Central to his performance are his real confidence, which is impressive, and his image, which is a wonderful mixture of Vampire nerd and velour lounge-lizard.

The audience were kept laughing throughout with his stories of wooing his boyfriend; the differences between modern methods and those from his parent’s generation; suffering from anxiety; playing a gig in Ipswich, and being mugged by the politest muggers ever.

His use of facial expressions accentuate many of the funny points during his stories as he peers over the tops of his glasses knowingly, or lunges forward, one leg outstretched and languidly strokes his own thigh. At one point he manages to transform himself in a raptor for a particularly comical scene which had us all rolling around with laughter.

His writing is no less brilliant and his use of words is evocative and economical, never rambling or stumbling. This is a performer who in years to come will certainly keep much larger audiences rapt with his routines as he lunges from one side of the stage to the other, whilst firing barbed lines and dreadful puns into the night.

This was my first encounter with Rhys Nicholson and I shall be looking forward to many more. He is a very funny and witty young man with a bright future ahead of him. Forward!

Rhys Nicholson ‘Forward’ is at the Melbourne Town Hall at 8:15pm until the 19th of April.
http://www.comedyfestival.com.au/2015/season/shows/forward-rhys-nicholson