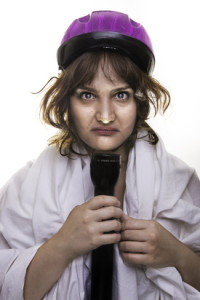 After the success of last year’s ‘Pillow of Strength’, Laura Davis is back at MICF with her new show ‘Ghost Machine’. Appearing before the audience as a ghost, Davis tackles the big questions surrounding our existence – What are we made of? How real are our feelings? What is the point of it all anyway? It’s the funniest existential crisis you’ve ever had the pleasure of watching.

In a way, it’s tough material to make comedy from. Questioning your own existence doesn’t tend to be a barrel of laughs. And yet, it’s such a quiet, secretive thing that most of us do, to discuss it in the loud, blunt way that Davis does highlights the absurdity of so much that is deep and scary in this world. We are all ridiculous creatures, dealing with the unknowable in our own imperfect, stupid ways.

Davis isn’t afraid to get personal with the audience. She shares stories about her childhood, her menial day job and her regrets, and invites the audience to do the same, applying her sharp wit to make comedy of our own sadnesses and terrible decisions. The show is raw, but this makes it feel more intimate and honest. It’s that honesty that makes Davis’ work so hilarious. She holds nothing back in her performance and it makes you want to reciprocate that openness by sending back laughter and joy into the terrifying void she speaks of.

‘Ghost Machine’ is introspective, but not self-pitying. Sad, but not despairing. It’s loose enough to draw your own conclusions from, or leave you questioning whether there are even any conclusions to be drawn. You’ll certainly be thinking about Davis’ words long after the show has ended. When I left, I felt like I needed a support group to help process all the thoughts and feelings it brought up, but in the absence of that, I feel like the next best thing would be to go and see the show a second time.

Laura Davis – Ghost Machine is on at Fort Delta until April 19
http://www.comedyfestival.com.au/2015/season/shows/ghost-machine-laura-davis