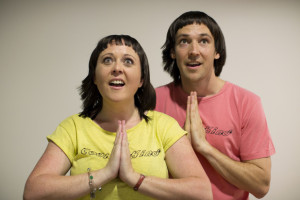 Dragged out of class and into the school hall, we (the year nine class of an unspecified high school) are to witness a show by Cool 2B Kind, a pair of religious educators from the Church of the Gospel of Pastor Greg. Jeremy (Jack Yabsley) and his twin sister / bride to be, Faye (Fiona Pearson) teach us how to survive all the issues that teenagers face and all about Pastor Greg’s wonderful compound.

The attention to detail in their parody of bad educational theatre is wonderful. The condescending talking down to their audience, the over exaggerated movements that screams first year drama school and cramming in as many confusing pop culture references as possible to talk to “the kids” on their level. We even get a segment of woefully bad puppetry to teach some life lessons.

The characters of Jeremy and Faye are brilliantly realised with their bad cult haircuts, daggy out of date clothing and sheltered world view. These are two stunted adults talking to a group of kids who have clearly passed them by in terms of life experience. There is an amusing naivety to this pair that makes them sympathetic characters in spite of the thinly veiled hatred that they are peddling. Unrequited sexual tension is ramped up over the show’s duration and dark secrets emerge. Despite plenty of comical bickering they valiantly plough on with the script.

It is interesting to see how the structure and content of the songs change as the show progresses to reflect the moods of our hosts. They begin with relatively cheerful tunes with repetitive buzzwords in an attempt to relate to “the kids”. They progressively get more complex as we are told in great detail what grisly fate awaits us if we sin. As the characters finally come unwound, disguising the underlying motives for the show is abandoned and the lyrics get darker and the message more blatant. All the songs are stuffed full of amusing ideas.

Cool 2B Kind is a brilliant character two hander that is enjoyable and hilariously cringe inducing in equal parts. Yabsley and Pearson throw themselves into the roles and belt out some impressive tunes. An immensely fun but disturbing hour.

Cool 2B Kind: A ‘Cult’ Comedy is on at The Butterfly Club until April 12