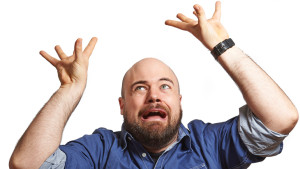 The audience almost had to make a difficult decision at Xavier Michelides’ Bad Accents and Inconsistent Mimes last night. You see, there were only nine of us, and according to Michelides 10 is the magic number you need to ensure you don’t feel horribly self-aware as you laugh. So if we didn’t make it to 10, we could choose to go our separate ways. But as we faced this dilemma, a handful more joined our ranks and we averted disaster. It was lucky for us, as Bad Accents and Inconsistent Mimes is a thoroughly hilarious hour of stand-up.

Michelides’ show delivers what it promises, but aside from the shonky accents and dodgy mimes there is a whole lot of quick wit and well-crafted jokes. His recent stints working on cruise ships provide some great material, as well as an excuse for some terrible puns. Michelides has also been hitting up the one-year-old birthday party circuit. His opinions on babies are harsh, but fair. There’s no overriding theme to the show. It’s just a bunch of really great jokes told by a hard-working comedian at the top of his game.

Michelides is likeable and interacts well with the audience. Given we were a smaller group, the show got a little loose at some points where he tested out some alternate punchlines to see which we preferred. It was an interesting little insight into Michelides’ process.

Michelides is performing some truly excellent stand-up right now and frankly it’s mind-boggling that he’s not playing to packed houses every night. Bad Accent and Inconsistent Mimes had the audience laughing the whole way through. It’s straight-up hits, no misses. The show finishes up this week, so hurry along before you miss it.