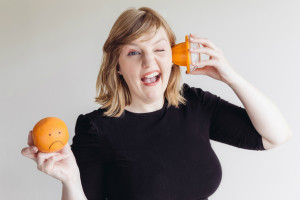 Kate and Pony work at the mail centre. They are terrible at their job. Kate is opposed to doing work with every fibre of her being, and poor Pony has a bad back. But through their apathy and misfortune, they find a whole heap of adventure. Pony Yell is a surreal step into the world of Kate Dehnert. The whole thing feels like a cross between a fairy tale gone wrong and an intense fever dream, and I loved every second of it.

Pony Yell is wonderfully silly. Dehnert has created a beautifully absurd magical universe. With the help of some hilarious pre-recorded voice acting from Dehnert and others, Pony Yell has a full cast of mythical and not-so-mythical characters. There’s a simple-minded rock monster, a passive-aggressive snake co-worker, and an unfortunate child named Giblets. It may be a one-woman show, but Dehnert presents a fully-realised world that’s a lot fun to spend time in.

The weirder Pony Yell gets, the funnier it is. Bizarre segments, such as the DJ practicing shout outs in the park, had me in pain. A rambling song about holidays was another highlight, even though it was a little difficult to make out all the lyrics. The hour is infused with a forcefully cheerful energy that is absolutely infectious. The jokes can be baffling, but they will have you grinning like a fool. The dilemmas Kate and Pony face are ridiculous, but you are rooting for them to the very end.

Pony Yell is an ambitious and confident show from an up-and-coming performer. Dehnert’s comedy is refreshingly different and an absolute joy to watch. Who knew sorting the mail could be so much fun?