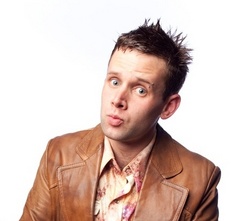 People often ask me if I ever get tired of seeing so much stand-up. Last night I saw my 100th show for this festival and I’m still laughing. It helps when there are comics as sharp and funny as Toby Halligan on the circuit.

Halligan is better known to many as a political comic with his writing having featured on The Project and Legally Brown, as well as being one of the driving forces behind regular monthly political comedy room Political Asylum, and although his solo shows do touch on some of the more overtly political topics of which he is so fond, mostly he talks about his own life and the peculiarities therein.

The theme of this new show is that of wanting to belong and finding your place in life and society. There are many clichés about gay men – they’re great dancers, dress well, flamboyant etc. – and Toby demonstrates his lack of conformity to any of these from the very beginning as he awkwardly bounces on stage in what is presumably his approximation of ‘dancing’ to a deeply uncool tune from the nineties. This tune ‘Scat Man’ is the source of his first tale of failing to fit-in and the stories become no-less funny as the show progresses.

As he states at the outset, music is one of our first tools used to find a means o fitting-in in social situations and the audience are encouraged to offer-up their own choices of first album ever bought. Most of these turn-out to be far cooler than Toby’s own choice. The audience is taken on a journey through Halligan’s various attempts to determine where he fit in his various social circles – what manner of ‘gayness training’ would he need to complete to slot into the various niches within the gay community and how to navigate the minefield that is the gay dating scene without the interference of his straight friends. We are kept laughing with tales of growing-up in the beige city of Canberra, experiments with drug taking and a little bit of politics – including a great anecdote about an encounter with Malcolm Turnbull.

Halligan is a very dynamic and engaging comic with practised stage presence knowing precisely the right tone to use to emphasise his points and gets full laughter potential from his tales of explaining GRINDR and Scruff to his Mother, pondering just what the gayest names are and a medical encounter with liquid nitrogen. For a great night of laughter and intelligent comedy this show is highly recommended.

Toby Halligan ‘The Bad Gay’ is playing at the Trades Hall, on the corner of Lygon and Victoria Streets at 9:45pm until April 19th.