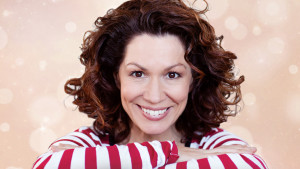 Seriously? is Kitty Flanagan’s latest show that focuses on tales of relationship breakdowns and issues associated with being a single, pet loving female – who’s completed 40+ laps around the sun. The ground she’s covering isn’t new, but she demonstrates the delivery skills that’d suggest she could talk for an hour about Accounting and have people in tears!

Although she’d hate to admit it, Flanagan’s now classed as a veteran on the Australian comedy circuit and she’s built up a solid following thanks to her work in the media throughout the last 15 years. And based on this performance, she’ll be around for many years to come.

She strode out to the Arts Centre stage and immediately set the show in motion by talking about the description on her Wikipedia page that almost accuses her of remaining single just for the comedic material it provides. She did a bad job of refuting the fact as she then took the packed crowd through the first (of many) relationship disaster stories.

Some may suggest her humour is “female” centric (well she’s not going to do comedy about living life as a purple puppet), but the jokes have the power to ensure she could wet pants at a mining show in rural WA. In fact, she has the ability to out-Alf Stewart Alf Stewart on the Aussie stakes when she switches into put down mode.

The central story that she wove in and out of during the night related to her relationship with a particular ex as she relayed hilarious insights into what went wrong. In fact, she brought herself close to the audience by really opening up. A standout gag relates to how she had a difference in opinion when it came to cleaning his underpants. This is worth the admission price!

She ended the performance as she did a previous show, she brought out her talented sister Penny on guitar and they played her new song, “Middle Aged Lady”, which proved to be an apt finale. The opening night of Kitty Flanagan’s MICF offering for 2015 was simply superb. It flowed beautifully, and has a story structure that would be fit for a TV special.

Seriously? is on at Melbourne Arts Centre (Playhouse) until April 19
http://www.comedyfestival.com.au/2015/season/shows/seriously-kitty-flanagan