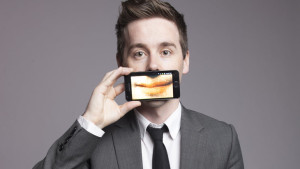 Josh Earl has a history of struggling to fit in. From growing up in Tasmania to making friends as an adult, he’s always been a bit out of place. In Square Peg, Earl explores the idea of finding your tribe. Through a witty collection of songs and stories, we are transported through Earl’s life, right up to his stint as host of Spicks and Specks. It’s an interesting story that will have you laughing the whole way through.

Earl’s love of music is at the heart of this show – both in the story and in his performance. His musical talent is on display from the get-go. The songs in Square Peg are well-crafted and never fail to amuse, with their clever lyrics and fun melodies. A song from the perspective of a local footy club coach back in his home town of Burnie was a particular stand-out and a good representative of Earl’s style – sweetly funny, lovingly mocking and never punching down.

Although the songs form the backbone of Square Peg, the stand-up elements of the show are just as strong. Earl’s story about his discovery of Nick Cave had the audience in fits of laughter, helped along by some fantastic impersonations of his parents hosting a dinner party. A short play in the middle of the show is absolutely hilarious and was the highlight of the show for me. Earl’s on-stage persona is very likeable. He interacts with the audience well, drawing them in and even helping out-of-towners with the more obscure Australian pop culture references.

Square Peg is a heart-warming piece of work from a talented musical comedian. Earl’s storytelling is engaging, affable and above all, funny.  If you’ve ever felt out of place in the world, this show is for you.