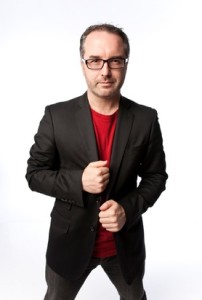 Things have changed since Justin Hamilton was a kid. Comics are now a ubiquitous part of pop culture, binge drinking is officially frowned upon and mobile phones have drastically altered the way we communicate. And while most of those changes have been for the better, sometimes it’s nice to reminisce about the way things were. That’s what we get in Snacks! – an entertaining collection of bite-sized pieces of comedy about nerds, booze and getting older.

Justin Hamilton has got to be the friendliest comedian at the festival. Before the show, he wandered down the line, checking how we were all doing. As we entered the venue, he greeted us individually, making sure everyone was ready before the show got underway. And as we left, he was at the door again, thanking us all for coming. Perhaps it’s part of Hamilton’s New Year’s resolution to become a better person. It helped to create a really nice, relaxed energy in the room, as though Hamilton were talking to us, rather than at us. From the minute the show begins, you know that Hamilton is an old hand. His delivery is pitch-perfect and he connects with everyone in the audience.

There’s nothing particularly revelatory in this show – we’re all aware by now that tequila is the devil – but Hamilton’s perspective on ageing feels fresh. The stories he tells are personal, but relatable, and he creates vivid pictures with his words. A description of his Mum dealing with a cat in the backyard was especially hilarious. The jokes are so quick-witted and the tales so engrossing that you leave wondering where on earth the hour went. It just flies by.

Snacks! is packed full of laughs and memorable stories, delivered by an absolute pro. I know I’m going to be singing Hamilton’s snacks song for a long while to come.

Justin Hamilton – Snacks! is on at Melbourne Town Hall until April 18